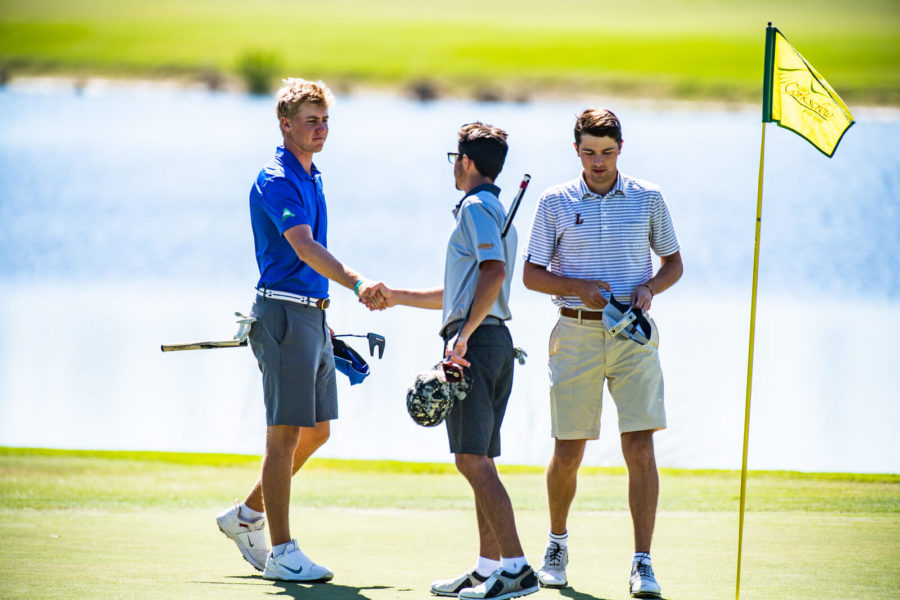 By Jordyn Matez
Sports Editor
Andrew Potter of the FGCU men’s golf team posted his third top 10 finish over four tournaments this weekend with a seventh-place finish at the Homewood/Hilton Garden Airport and FGCU Classic to not only beat his season-best score, but also aided the FGCU men’s golf team to a fourth place finish overall.
The Eagles shot a 303, or a 15 over par, in the final round of the tournament on Monday to finish fourth among nine teams with an overall score of 918, or 54 over par. This marks the men’s golf team’s highest finish of the fall season.
The third-place team, Eastern Kentucky, finished nine strokes ahead of FGCU.
Following the first day of the tournament, Potter was in the fifth place position individually, while the combined men’s golf team was also positioned fifth.
FGCU’s Tate Heintzelman finished the first round of the tournament with an overall score of 152 (eight over par) to have him tied in 13th place entering Monday morning. By the end of the tournament, Heintzelman had received a tying score for 16th place.
FGCU’s final round on Monday was led by Cole Castro, who shot one under par for a team-low 71.
“We saw some improvement today, but it was still disappointing overall,” FGCU head coach Eric Booker said after the final round. “We’re a much better team than the results indicate. We will do some evaluation and refocus our attention on improving before the spring season. On the positive side, Andrew had another top 10 performance and Cole shot a 71 today. We had some players under the weather, but we’ll get healthy for this spring.”
This tournament marks the end of the fall season for the FGCU men’s golf team. Men’s golf will not play again until the Colin Montgomerie Invitational, which will be held from Monday, Feb 25 to Tuesday, Feb 26.
Delete Image
Align Left
Align Center
Align Right
Align Left
Align Center
Delete Heading