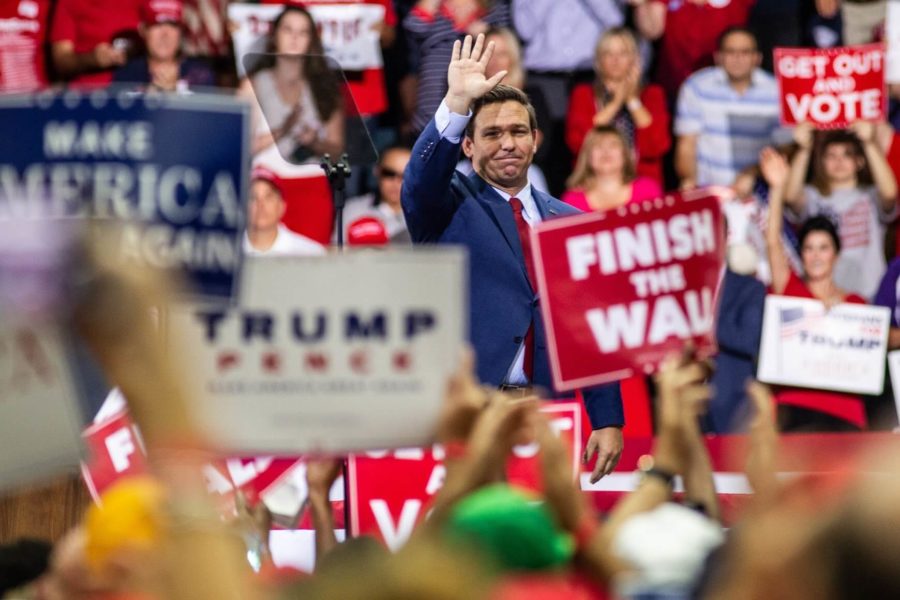 EN Photo by Bret Munson // Florida governor-elect Ron DeSantis waves to the crowd at a rally in Fort Myers leading up to the election.

The GOP will maintain control of Florida’s governor seat as Republican Ron DeSantis defeats Democrat Andrew Gillum, with 49.86 percent of the vote.
In the nail biting race, DeSantis won by a one percent margin, destroying governor after Gillum conceded the race in a speech.
“On Election Day, it’s the voice of the people that roars,” DeSantis said.
DeSantis’s victory keeps a stronghold for republican’s in the governor’s office since Jeb Bush’s win in 1999.
Originally from Jacksonville, DeSantis, 39, graduated from Harvard law school, was an attorney general, an Iraq War veteran and served as a former U.S. Representative for Florida’s 6th congressional district.
DeSantis led a campaign targeting working-class families, lowering taxes and restoring the Everglades.
Trump came to rally to endorse DeSantis in Fort Myers, a political effort to motivate republican voters.
“We could not be prouder of how we ran this race,” Gillum said. “I sincerely regret that I couldn’t bring it home to you.”
Early in the election, Gillum and incumbent U.S. Senator Bill Nelson appeared to be winning the race, until results shifted as red suburban counties poured in.
DeSantis’s triumph ends all hope for a “blue wave” in Florida, and Rick Scott’s near victory against incumbent U.S. Senator Bill Nelson could mean Republican dominance for the state.
DeSantis faced some controversy when he made a comment toward Gillum asking voters to not “monkey this up.” DeSantis was also linked to campaign contributors who made racial slurs toward former President Barrack Obama.