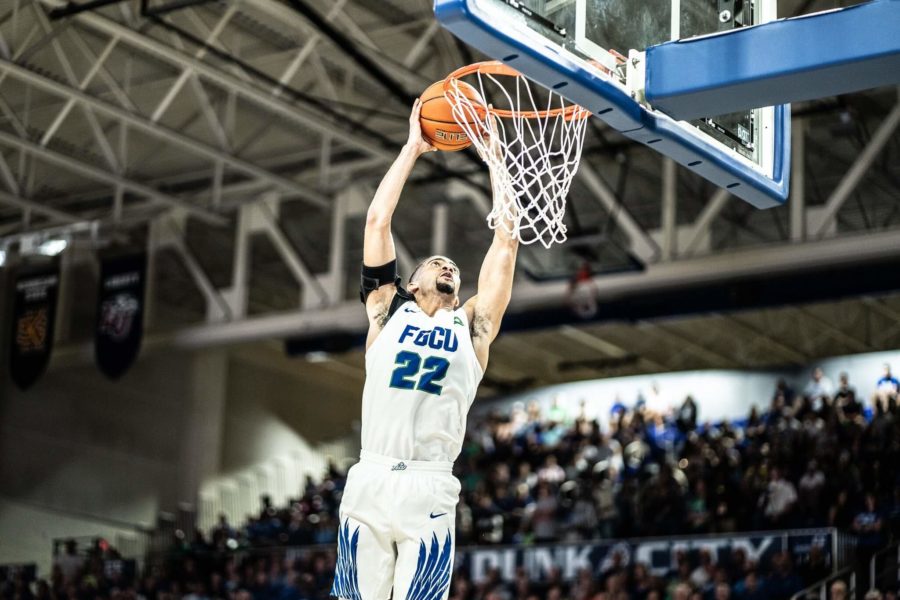 By Jordyn Matez
Sports Editor
The FGCU men’s basketball team defeated Southeastern University 81-54 in their home opener on Thursday night to bring their overall record to 1-1.
Schadarac Casimir led FGCU statistically, logging 16 points, including five field goals and two three-pointers. Dinero Mercurius was also dominant offensively, leading the Eagles in three-pointers with three.
The Eagles held the upper hand from the beginning, coming onto the court with a basket by Christian Carlyle that eventually evolved into an 11-point run. The Fire had one opportunity to score some points during this with a penalty on the Eagles but were unable to take advantage of the opportunity and continued play without points.
Four minutes in, however, Southeastern managed to find the basket to break FGCU’s run and put some points on the board, also gaining a free-throw off a foul.
FGCU’s Brady Ernst responded to this with the first slam dunk of the night to make the score 13-3 Eagles five minutes in.
Following this, the Fire gained some momentum and began to steadily climb back as the first half continued. Southeastern took their first and only lead of the night in the 14th minute with a basket by Isaiah Moody to bring the score to 20-18.
Southeastern’s lead was short-lived, however, when a three-pointer by Schadrac Casimir began a 14-point run for the Eagles in the 15th minute of play.
During this run, FGCU’s Dinero Mercurius shot two three-pointers in a row to give the Eagles six points, and the game saw its second slam dunk by Haanif Cheatham in the 18th minute to bring the score to 33-20.
The run ended with a shot by Southeastern’s Dylan Causwell with two minutes left in the first half. Another point by each team brought the score to 35-24 at the half.
There was no loss in stamina between halves for FGCU, who began the second half with baskets made by both Cheatham and Troy Baxter Jr. This was shortly followed by a foul on Carlyle that allowed the Fire to advance two more points, making the score 39-26.
Coming into the second half at such a large disadvantage would prove to be deadly for Southeastern, who was unable to bounce back from a 13-point deficit going into the second half.
The pace remained the same throughout the first minutes of the second, with FGCU the Eagles finding the basket a fair amount more than the Fire, who continued to steadily fall behind.
Eight minutes into the second half the game saw an influx of fouls, due in part to Southeastern’s aggressive attempt to regain control of the game. A foul on Southeastern in the eighth minute allowed Casimir to give two points to the Eagles, though less than a minute later FGCU found itself on the other side of the foul line to give the Fire an opportunity for two points as well.
Three more fouls would be called on Southeastern in the next minute alone, giving FGCU two more points to bring the score to 58-36 10 minutes in.
The remainder of the game consisted of four fouls called on each team as the second half proved to be fairly dirty.
Southeastern gained some momentum late in the second half, but it wasn’t enough to climb back from what was at one point in the game a 30-point deficit, and the Eagles took home their first win of the season.
“There’s no such thing as a bad win,” FGCU head coach Michael Fly said. “These guys know the way that we want to play, and I think the more comfortable that we get the more you guys will see what we’re trying to do.”
Next, the Eagles will travel to East Lansing, Michigan to take on No, 10 Michigan State University on Sunday, Nov. 11 at 6 p.m.