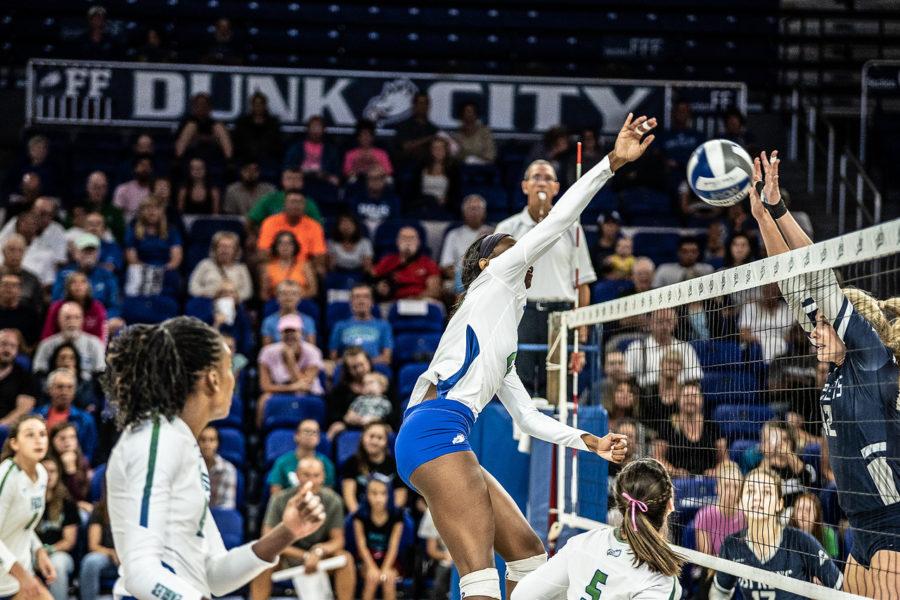 By Emily Kois
Managing Editor
Despite uncharacteristic play from the FGCU volleyball team, the Eagles were able to secure an outright ASUN championship with a four-set win over Liberty Saturday night.
Prior to the game, the five seniors on the team were recognized for their time at FGCU. Carroll, Rick, Karissa Rhoades, Kaitlan Krivdo and Pickering were all honored. This senior class is one of the strongest in program history.
The class includes program’s all-time leader in kills with Carroll, the all-time leader in assists with Rick, the all-time leader in matches played (Rick) and the program’s single-season leader in hitting percentage with Pickering. Rhoades also totaled 900 in her career while Krivdo ranks in the program’s top 20 in total blocks, block assists, blocks per set, matches played and hitting percentage.

Since it was a bittersweet night for the Eagles, emotions were at an all-time high.
“There’s a lot of emotion in a game like this,” FGCU head coach Matt Bortsford said. “You have five individuals who have given so much to the program that it was hard to focus on the task at hand, which was to play a really tough Liberty team. It wasn’t great volleyball from our end, and we’re going to have to be much better, but I expect we will be.”
This win marks the Eagles thirteenth-straight win, losing just three sets over the past 10 matches. FGCU will now play the winner of No. 4 Liberty and No. 5 Stetson in the semifinals at 5 p.m. on Friday.
The championship is set to start at 7 p.m. on Saturday.
Offensively the team was led by Pickering who tallied 12 kills and five blocks, hitting at a .647 percent. Rick and Lockey led with assists totaling 18, while Dana Axner finished with a match-high 22 digs.
Daniele Serrano led with six blocks followed behind Tori Morris who tallied five and Giovanna Borgiotti who finished with four.

In the opening set, the Eagles were down 6-4 as Liberty continued to take control and claim the early match lead.
Back-to-back kills from Cortney VanLiew and Pickering allowed the Eagles to take the lead in the next set, but only for a short time as Liberty fought back to tie it at 20.
In the third set, FGCU scored five of the first six points and led 18-11. Later on, in the third set, a 5-0 run with kills from Serrano led the Eagles to secure the set.
FGCU jumped out to an early 13-5 lead in the fourth set before cruising to a nine-point win in the final set and a match victory over the Flames.