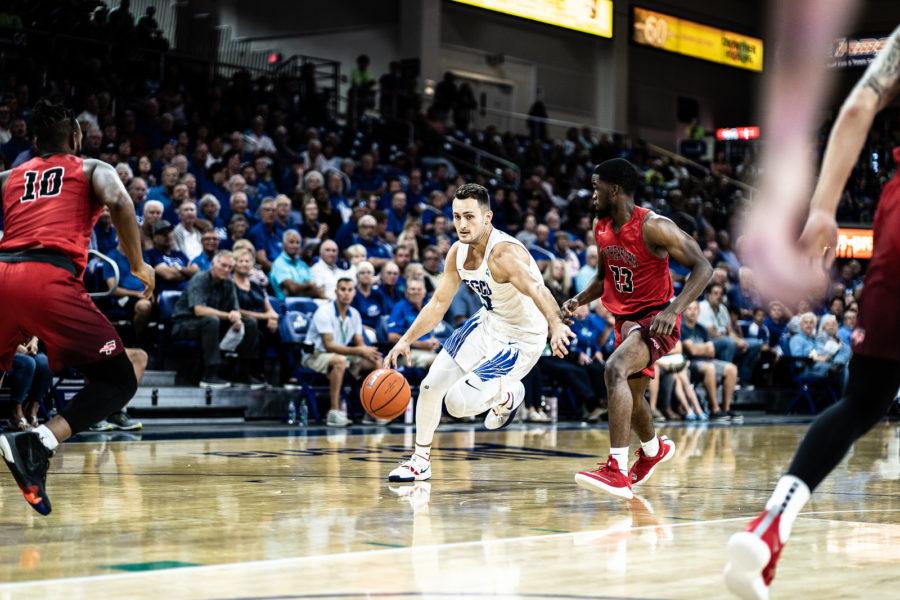 FGCU men's basketball's Christian Carlyle brings the ball down the court during a home evening game. Carlyle scored 20 points in the loss.

By Jordyn Matez
Sports Editor
In one of their most anticipated games of the season, the FGCU men’s basketball team suffered a 106-82 loss against No. 10 Michigan State University on Sunday night to bring their overall record to 1-2.
Though both Christian Carlyle and Troy Baxter Jr. scored a career-high 20 points each, it was still not enough to overcome a 24-point deficit by the final buzzer.
In a repeat of what has been seen throughout the first few games of their season, the Eagles came out onto the court strong and quickly lost momentum before halftime. The game began with Baxter leading the pack, scoring seven of FGCU’s 10 points to force a Michigan State timeout at 2:15.
This advantage didn’t last long, however, due to a 16 point run by the Spartans that did not allow the Eagles to find the basket for almost five minutes straight. This put Michigan State  ahead by 12 points in the first half.
This small lead was the only lead of the night for FGCU, who quickly fell too far behind to catch up and never came within 16 points of Michigan State’s lead.
“I didn’t think we were competitive enough on the defensive end tonight” head coach Michael Fly said.  “To have 22 assists and only 14 turnovers and to still lose by 24, that points towards a problem on the other side of the ball. You just have to play better defensively and rebound better than we did if you are going to win a game like that, and we knew that coming into tonight.”
Next, the Eagles will return home for the highly anticipated Gulf Coast Showcase where they will battle South Dakota State and the University of Toledo starting on Friday, Nov. 16 and ending on Wednesday, Nov. 21.