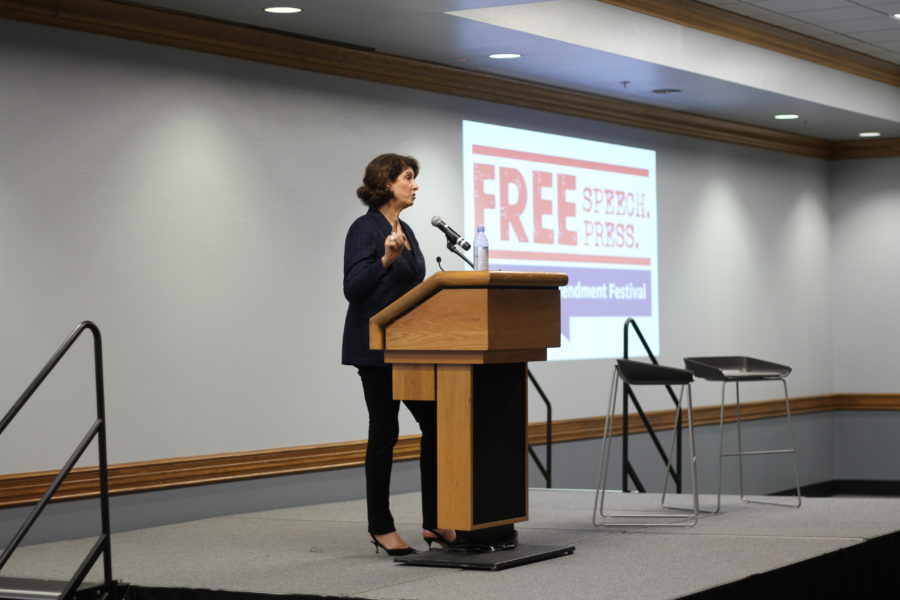 By Alexandra Figares
Editor-in-chief
As the sun rose over FGCU Tuesday morning, the scent of breakfast and chatter between local journalists and students inaugurated FGCU’s First Amendment festival in Sugden Hall.
The festival, put together by The News-Press, Naples Daily News and WGCU in partnership with FGCU’s journalism program, discussed the importance of free speech in journalism through workshops and seminars.
FGCU’s President Mike Martin and executive editor of The News-Press, Cindy McCurry-Ross opened the festival along with CBS war correspondent Alex Pena.
Professor of journalism at FGCU, Lyn Millner, hosted a “fake news” seminar, dedicated to helping the public detect fake news and urging attendees to do their own research.
The seminar followed a First Amendment in First Person panel discussion, led by local journalists like Rachel Iacovone WGCU, Jeff Kleinman from the Miami Herald, Amy Bennett Williams from The News-Press and Phil Keating from Fox News.
“What my work has taught me over the last seven years is that that’s not the case all over the world,” Pena said. “That some of our friends and colleagues don’t share that with us. So, to me, it’s become a side mission in my journalism to continue telling their stories.”
Pena, an FGCU alumnus from the journalism program, said he never had to worry about not publishing stories or photos when he worked for the school newspaper. But, that quickly changed when he traveled to Juarez, Mexico.
While working with colleagues covering local corruption in Mexico, Pena said the questions he had never had to face suddenly emerged, changing his perspective.
“Do you feel safe? Do you want to publish that photo? Hey, don’t point the camera in that direction,” Pena said. “Those were questions I never had to deal with here. It was really that experience for me that ingrained into me how important it was (free speech),” he said.
Pena has since covered the Taliban in Afghanistan, Standing Rock and the stories of journalists who risk their lives to tell uncover the truth.
Martin echoed the importance of free speech in journalism.
“Not only is it important to speak the truth,” Martin said. “It’s important that the rest of us step up and protect those people who do.”
Other festival guests included keynote speaker Mara Liasson, a national political correspondent for NPR who has covered seven presidencies and is a frequent contributor to Fox News.
“The thing that keeps civil discourse going is when people start with facts and form their opinions, and not the other way around,” Liasson said.
Martin referenced James Madison in regard to freedom of speech and said it was critical in order to uphold democracy in America.
“I hope that this is only the first of a series of these things we can do to engage the community, to engage the public, to use this university as a platform and to come together and challenge ourselves about difficult topics,” Martin said.