A look ahead into the ASUN volleyball championship tournament 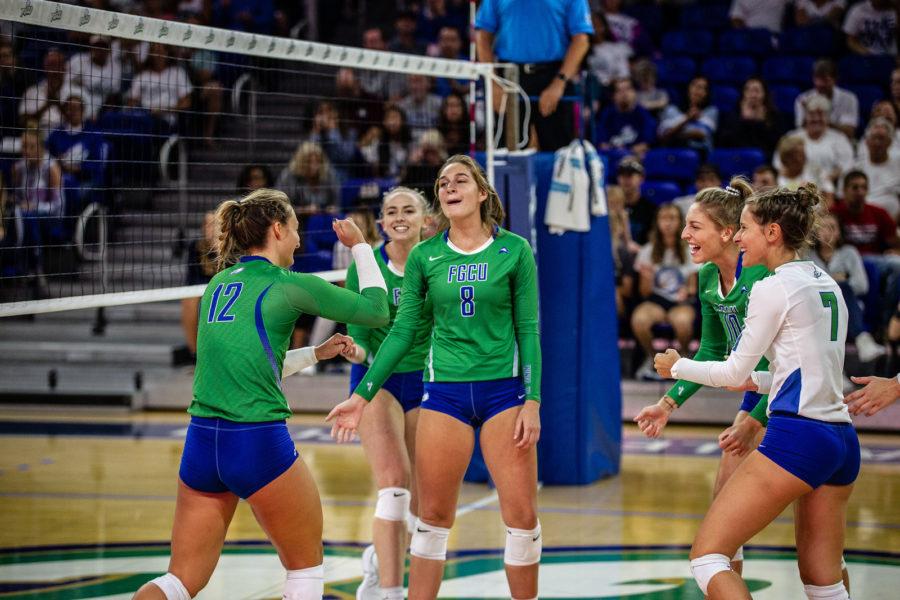 By Jordyn Matez
Sports Editor
Following a win over Liberty University last weekend, the FGCU volleyball team has claimed a regular season ASUN title as well as a direct ticket to the semifinals of the ASUN volleyball tournament.
The Eagles have seen a record breaking season this year, most recently surpassing a Division-I program record for fourth-most consecutive matches won, winning 13 in a row during their 2018 season. The team has also lost just three sets over the past ten matches, winning 30 of 33 sets played.
Not only this, but due to their outstanding 15-1 conference record the Eagles have received the top seed in the ASUN tournament and, because of this, were granted a bye week and will advance directly to the semifinals.
This game will be played against the winner of the quarterfinals match between Liberty University and Stetson University on Friday, Nov 16 at 5 p.m.
This matchup proves to be promising for FGCU no matter who they play. The Eagles have played both Liberty and Stetson twice so far this season, prevailing in all four matches.
The closest either team came to a win was a narrow 3-2 win against Liberty early on in the season, but statistics have proven to be favorable for FGCU as their performance only improved since this game. The next time the Flames and the Eagles met, FGCU defeated Liberty by a wider margin of 3-1.
The FGCU volleyball team has also never had a conference record as successful as their 2018 season, losing only a single game for the first time in the program’s Division-I history.
Should they advance to the finals, the only ASUN team that the Eagles may be at a disadvantage to is Kennesaw State University, which handed the Eagles their only conference loss in the early games of the season.
While this puts the pressure on FGCU to deliver in a matchup against KSU, a more recent match in early November gave the Eagles a chance to redeem themselves with a 3-1 win over the Owls, effectively securing a win over every other team in the ASUN conference.
Since their inaugural year into the ASUN conference in 2008, the Eagles have never clinched an ASUN championship title. Though they have made it to the tournament eight times, they have only made it to the final game three times, where they lost to Lipscomb on two occasions and Kennesaw State on the third.
This not only sets the stage for a potential first-ever ASUN championship title, but adds to the pressure of what a win would mean to the FGCU volleyball team.
Given the current standings of the ASUN conference as well as the overall performance from each school throughout the regular season, the FGCU volleyball team enters the ASUN championship tournament at an advantage.
With that, the Eagles will attempt to use this advantage to win their first ever ASUN championship title this weekend.