Volleyball headed to finals after 3-0 sweep of Liberty University 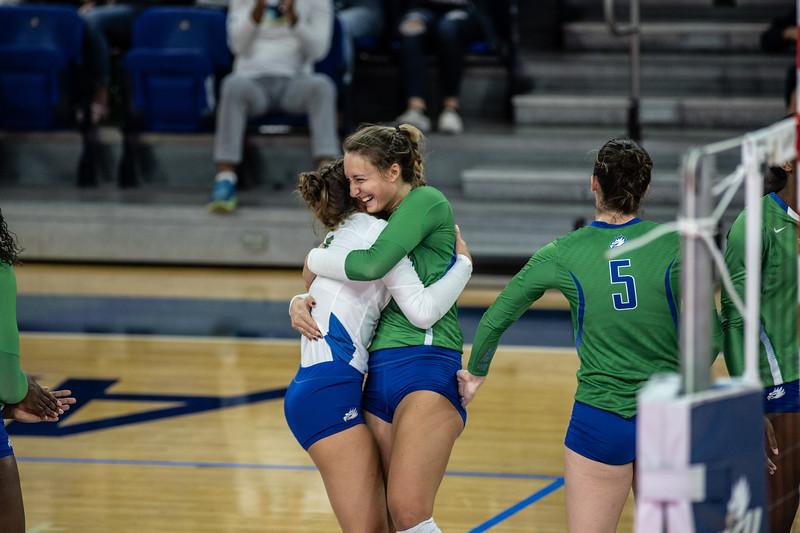 EN Photo by Bret Munson // FGCU volleyball's Cortney VanLiew and Dana Axner celebrate a home game win in the regular season. The Eagles defeated Liberty University 3-0 in the ASUN conference semifinals and are now headed to the championship match.

By Jordyn Matez
Sports Editor
The FGCU women’s volleyball team will play in the ASUN conference volleyball championships following their victory in the semifinals over Liberty University 3-0 on Friday night.
The first set began with a general lack of energy by the Eagles, being that they had been awarded a bye week and hadn’t seen any play time since the end of their regular season.
The Liberty University Flames came onto the court ready to win, fresh off their victory over Stetson University in the quarterfinals Thursday night. Their determination showed as the team gathered a 4-point lead quick into the game.
Regardless of Liberty’s success and FGCU’s struggle, both teams saw an abundance of errors in the first set with many serving errors.
The Eagles capitalized on the Flames’ errors and took the opportunity to finally take charge in the game, with Cortney VanLiew leading a massive run, putting FGCU up by two and bringing the score to 18-16.
Although they had lost their lead, Liberty remained diligent with their play and kept the score fairly even, keeping FGCU from a set win long enough to allow them to bring the score to 24 all, adding pressure to both sides to deliver.
The first set went to FGCU, after Liberty failed to keep their defensive play up, putting the Eagles at an immediate advantage going into the second set.
Similar to the first set, Liberty held up a lead off the bat, though the Eagles fought to keep the lead small this time.
Determined not to lose their lead, Liberty took an aggressive approach that aided them in a small run to put the Flames up 8-4.
FGCU’s VanLiew had other plans for her team, however, as she smashed out three blocks in a row to give FGCU a 12-11 lead.
This lead would continue into another set win for the Eagles, regardless of Liberty’s strong effort to stay in the game.
Liberty’s aggressive methods on the court rolled over into in the third set and gave them yet another lead, but FGCU recognized this and remained one step ahead.
The energy from the Flames started to dwindle as the third set winded down, with FGCU leading by nine points late in the game, bringing the score to 19-8.
Liberty remained diligent until the very end of the match, doing their best to chip away at FGCU’s lead throughout most of the second half of the match.
This effort wasn’t enough to keep FGCU from a match win, however. A strong block by FGCU’s Tori Morris gave the Eagles the 25th point they needed to win the match and advance to the finals.
The winner of the semifinals game between Lipscomb University and Kennesaw State University will next challenge the Eagles in the championship match on Saturday, Nov. 17 at 7 p.m.