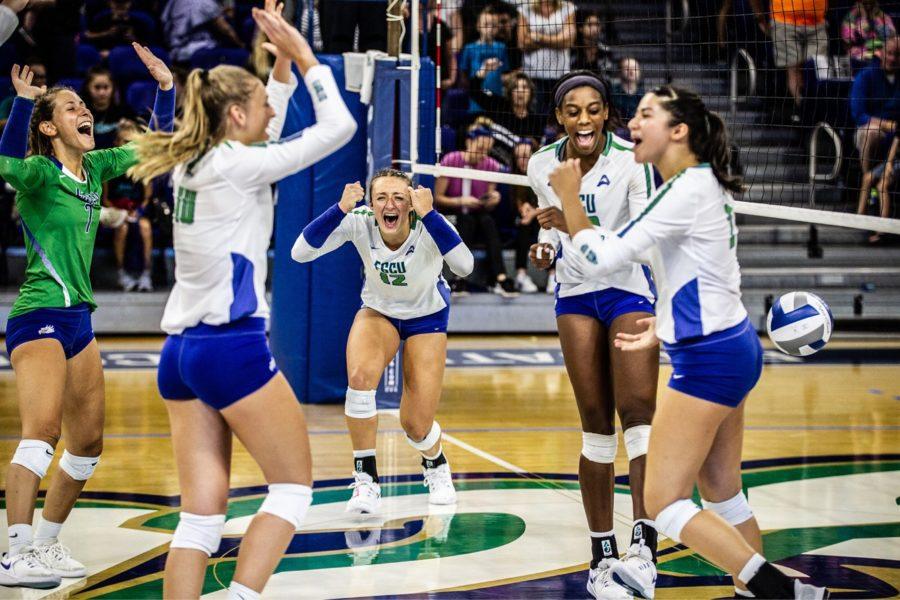 ​The first two sets proved promising for the Eagles as they have had success throughout this season with closing out matches 3-0. This was not the case in the championship match, however, due to the Owls’ determination to clinch a second consecutive championship.
​The Owls climbed back over the next two sets and pushed the game to a fifth set, fighting until the very last rally.
​The first set began with a point for the Eagles, though KSU remained in the first and kept FGCU’s lead within a few points. FGCU continued to keep a small lead throughout the first half of the set, though a block by KSU tied up the score at 15 for the first time in the match and, eventually, a one-point lead.
​Regardless of the attempt by KSU to capitalize on a small lead, FGCU took an aggressive approach following a time-out and went on a crucial five-point run to make the game 21-16.
​This run was all the Eagles needed to secure a set andtook an easy set win on a serve error by the Owls.
​Down by one, KSU got the momentum they needed to take the first lead of the set, though a back to back kill and block by FGCU’s Sharonda Pickering gave the Eagles a 3-2 lead.
​Taking a more defensive angle, a few well-timed blocks by the Owls gave them a small two-point advantage as the game continued, but the Eagles pushed back with an equal amount of defensive effort that led to a five-point run in FGCU’s favor.
​Following a block by Giovanna Borgiotti, the Eagles began to capitalize on their momentum and led by five towards the end of the set.
​The Owls seemed determined to keep the Eagles from a two-set advantage and climbed up from a five-point deficit to tie the game at 24; momentarily keeping the Eagles from a win.
​Though both teams put forward an equal amount of effort, a block by Snowy Burnam set FGCU up for the kill they needed to take a two-set lead.
​The third set remained close throughout the entirety of the set, with both teams consistently delivering when they were down a point.
​Multiple service errors by KSU put them at a disadvantage as both teams went into double-digits. However, the Owls came back with a kill to even out the score at 14.
​As a result of multiple errors by the Eagles, the Owls were the first to 20 points for the first time in the match, which gave them the momentum they needed to close out the set with a block, forcing a fourth set.
​Six points were given up by FGCU due to service errors in the third set, which proved to be deadly as KSU won the match by four points.
​The fourth set saw an immense amount of effort from the Owls, who came onto the court with a winning mindset and took an eight-point lead to bring the match to 12-4.
​The Eagles struggled to remain in the game, though a few well-timed plays cut KSU’s lead to seven momentarily.
​This was not enough to keep the Eagles in the game, however, as they were unable to climb back from such a large deficit and dropped the fourth set 25-17.
​The Owls tied up the game with a fourth set victory, forcing a fifth and final set to finish the match.
​FGCU, who seemed determined to not have a repeat of the set before, came out of the locker room running and took a 4-0 lead following an impressive performance by VanLiew, which included a kill and an ace.
​The Owls responded with a kill to finally put a point on the scoreboard, but Burnam responded with a kill of her own to keep the Eagles up by four.
​Following this, both sides struggled to communicate and fell out of touch momentarily, with multiple errors by both teams bringing the score to 7-4 Eagles.
​A run by KSU cut FGCU’s lead to a single point, but VanLiew responded with a kill.
​With the set tied at 10-10, both teams felt pressure to deliver and saw errors. A service error by KSU makes the score 14-13, meaning a match point for FGCU.
​The last play of the game was a dropped ball on KSU’s side of the court, which meant a match win for the Eagles and an ASUN championship title to go with it.
​“It’s amazing, and the most amazing thing about it Is that I’ve waited five years to see this reaction right here from these players,” FGCU head coach Matt Botsford said. “And our first recruiting class goes out as seniors doing something that no group has done before in our program.”
​The Eagles will return home for a brief bye period as they prepare for the NCAA tournament championships, which will begin on Dec. 13.