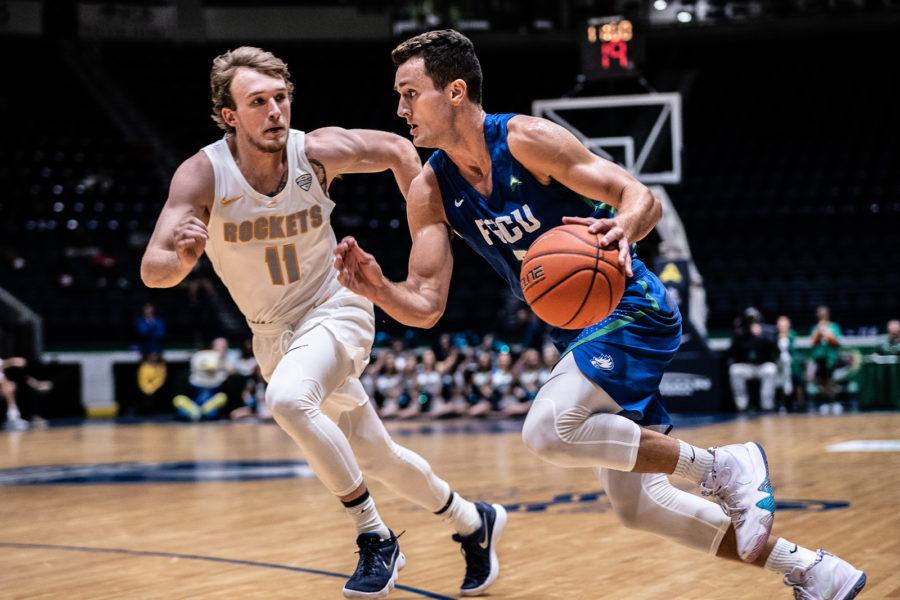 FGCU men's basketball's Christian Carlyle carries the ball down the court during the game against Toledo on Monday night. Carlyle, along with Haanif Cheatham, led FGCU offensively with 13 points.

By Jordyn Matez
Sports Editor
The FGCU men’s basketball team fell 62-90 to the University of Toledo in the opening game of the Gulf Coast Showcase basketball tournament on Monday night.
Christian Carlyle and Haanif Cheatham led the Eagles offense, both scoring 13 points apiece. Cheatham also logged a season-high seven rebounds.
“All credit to Toledo tonight,” said head coach Michael Fly. “They competed and played with toughness and we did not. The great thing about this situation is we get a chance to correct it tomorrow. We talk about the pillars of our program being defense, rebounding and ball movement and tonight we did none of the three. We will get that corrected.”
The FGCU men’s basketball team will continue to compete in the Gulf Coast Showcase throughout the rest of this week. Next, the team will take on Colorado State University on Tuesday, Nov. 20 at 1:30 p.m.