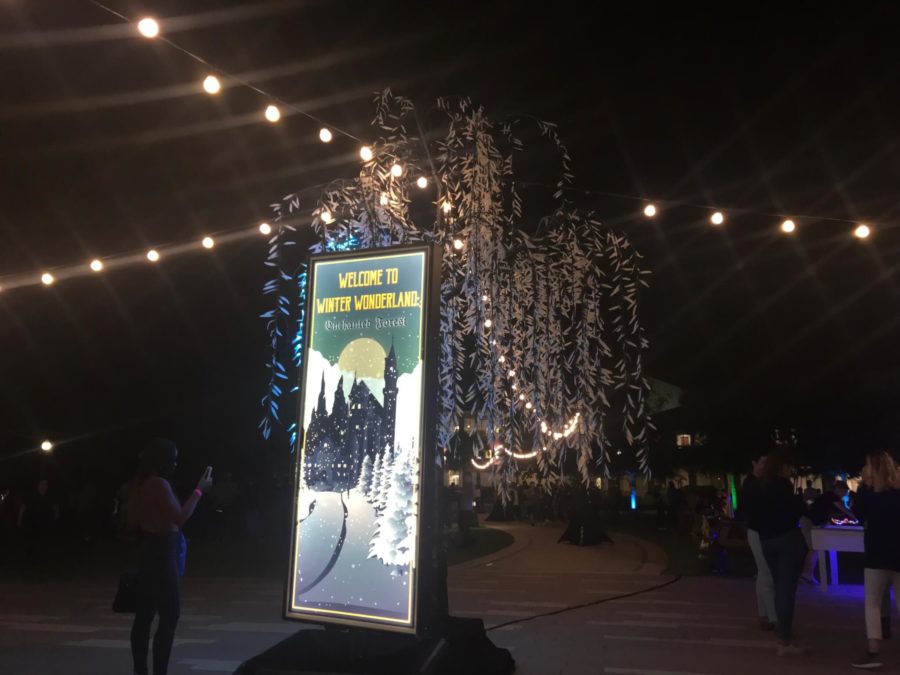 By Nina Mendes
Staff Writer
With final exams in full swing, experiencing stress during the home stretch of a semester is inevitable for most students. Throughout the months, there have been a variety of events on campus that aimed to alleviate student’s anxiety and provide a “brain-break” of some sort. A number of those events were hosted by FGCU’s Programming Board (PB) which offers educational and social entertainment to the campus community.
On Friday, Nov. 30, PB hosted their ninth annual Winter Wonderland with this year’s theme being enchanted forest. The event was held on Library Lawn from 8-11 p.m. and was free to attend. While students patiently stood in line waiting to take part in the winter-themed festivities, they were able to pass the time by watching the Chronicles of Narnia that was played on a big inflatable screen.
“I am very excited to hold FGCU’s ninth Winter Wonderland,” said PB Director of Traditions Mackenzie Hamblett. “With finals being such a stressful time of the year, my goal is to have Winter Wonderland be a great way for students to come enjoy a few hours of relaxation and fun.”
Once entering the Library Lawn, an assortment of tables was spread across the lawn where students could participate in different activities. A few popular stations were where people could decorate snow globes, take pictures in a photo booth, create custom license plates and play blacklight mini-golf. There was also a hot cocoa bar, shaved ice truck and catered food on the scene that drew a lot of students into the crowd. A mini train drove students around the perimeter of the lawn where all sixteen activities could be seen.
“Attending Winter Wonderland was such a stress-reliever for me,” Freshman Lea Manniello said. “I’m almost finished with my first semester, and it was good to be able to get out of my dorm and have some fun before I start studying for my finals.”
Members of PB began setting up for Winter Wonderland at 8 a.m. on the morning of the event so that everything would be put together by when doors opened. The twelve-hour long process paid off because the event had an extremely successful turnout with around 900 people attending that evening, according to PB’s Director of Promotions, Kyle Grosskopf.
“It took about a whole semester to set things up,” said Celeste Polin, President of PB. “Starting in August, we planned all [fall] semester and in November is when we promote. I just hope everyone had a fun time tonight, and [PB] loves to put smiles on the faces of the students”