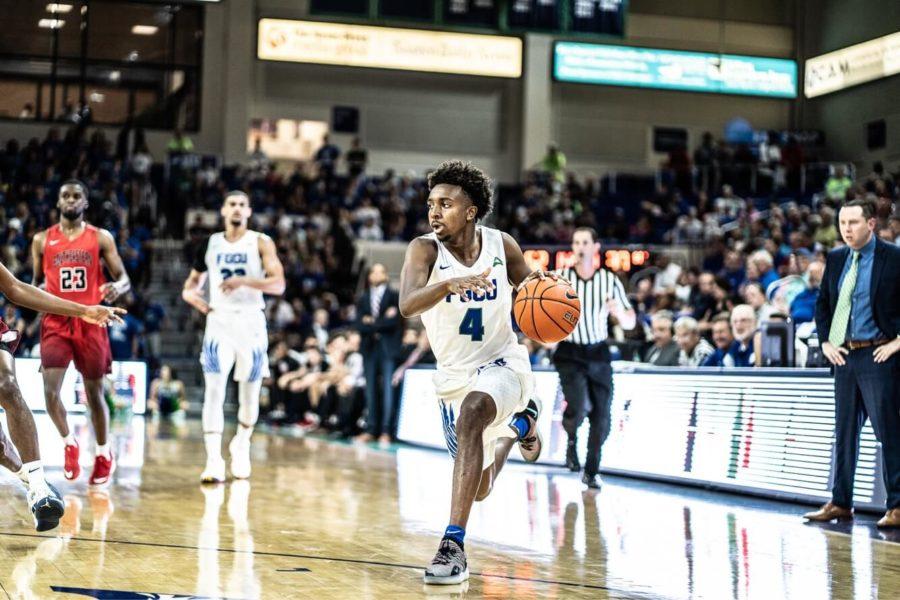 Sports Editor
The FGCU men’s basketball team defeated Keiser University by only two points on Wednesday, bringing their current win streak to three in a row.
The freshmen Eagles held the weight of the team throughout the game, with a leading offensive performance by true freshman Zach Scott, who scored 25 points overall. This marks the highest total by an Eagle so far this season.
Scott’s fellow freshman Caleb Catto also saw a personal record with 12 points to his name, marking his first game scoring double-digits.
Schadrac Casimir and RaySean Scott Jr. also contributed to the 87-85 win, contributing 14 and eight points respectively. Scott Jr. also provided a team-high 12 rebounds along with four blocks, three steals and two assists.
Overall, the Eagles shot 50.9 percent, going 31-for-68. They also shot 42.9 percent (12-for-28) from behind the three-point line and 78.6 percent (11-for-14) in free throws.
“Keiser was really competitive tonight. They came here expecting to win the game,” FGCU head coach Michael Fly said. “I didn’t think we competed for most of the night. We were fortunate that Zach (Scott), Caleb (Catto) and some of our guys stepped up for us, but I was disappointed in our effort overall.”
Next, the FGCU men’s basketball team will travel to Sunrise, Florida to compete in the Orange Bowl Basketball Classic against the University of Florida on Saturday, Dec. 22 at 5 p.m.