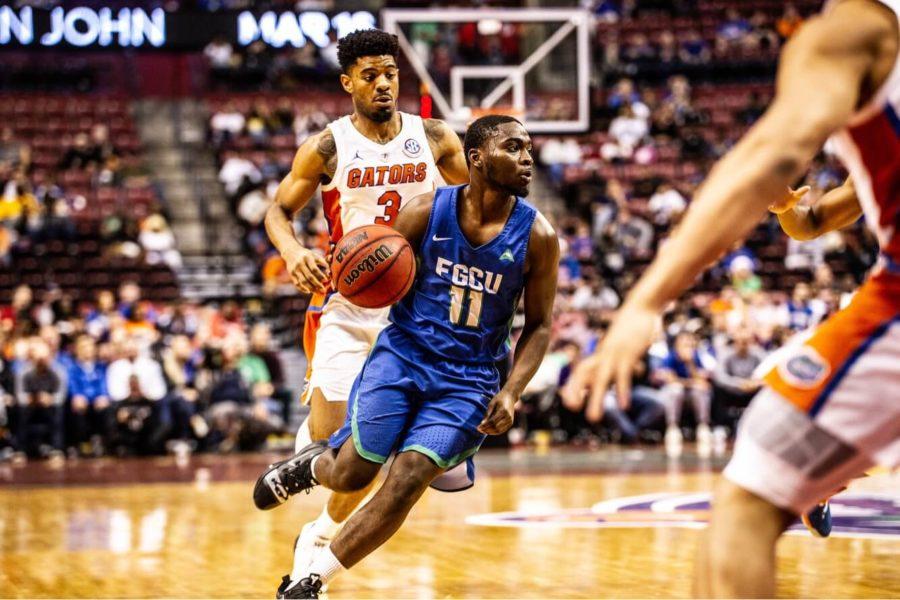 Sam Palmisano
Opinion Editor
The FGCU men’s basketball team suffered a 77-56 loss to the University of Florida in the Orange Bowl Basketball Classic in Fort Lauderdale, Florida this past Saturday.
The game opened to a slow start from both teams as the Eagles struggled to find offense against a full-court press defense that would last the duration of the game. The Gators started 0-for-3 from the 3-point line with their first three shots, but they eventually found their rhythm.
As offense continued to struggle, the Eagles were down 23-8 10 minutes into the game. As the offense found holes in the Gator defense, FGCU came within 4 points for the first time since the opening minutes of the game.
FGCU’s Schadrac Casimir gave the Eagles initial offense, scoring FGCU’s first 10 points on 2-for-5 shooting and going 6-for-6 from the free throw line. Casimir went scoreless the remainder of the game.
Troy Baxter Jr. then took over the offense with 13 points, shooting 4-for-9 from the field and 5-for-7 from the free throw line.
Closing out the first half, the Gators went on an 11-4 run to bring their lead to 37-26 at halftime. The Gators went on a 7-0 run during the opening 2 minutes of the second half, making the score 44-26.
With a game total of 22 turnovers, the Eagles never recovered and spent the rest of the second half trailing by 20 or more points. The Eagles shot 18-for-46 (39%) from the field and just 2-for-14 (14%) from the 3-point line.
The Gators shot 28-62 (45%) from the field and 11-for-30 (37%) from the 3-point line. UF’s Jalen Hudson led the Gators to victory with 14 points and 6 rebounds, a feat that earned him the Most Outstanding Player award.
The Gators showed their stamina with a full-court press defense on every single possession, limiting the Eagles time on offense. The pressure showed as the Eagles struggled to inbound the ball, get across the half court line, and turned the ball over with 5 shot clock violations.
The loss brings the Eagles’ record to 5-9 on the season.
Next, the Eagles will take on Ole Miss next Saturday, Dec. 29 in Oxford, Mississippi.