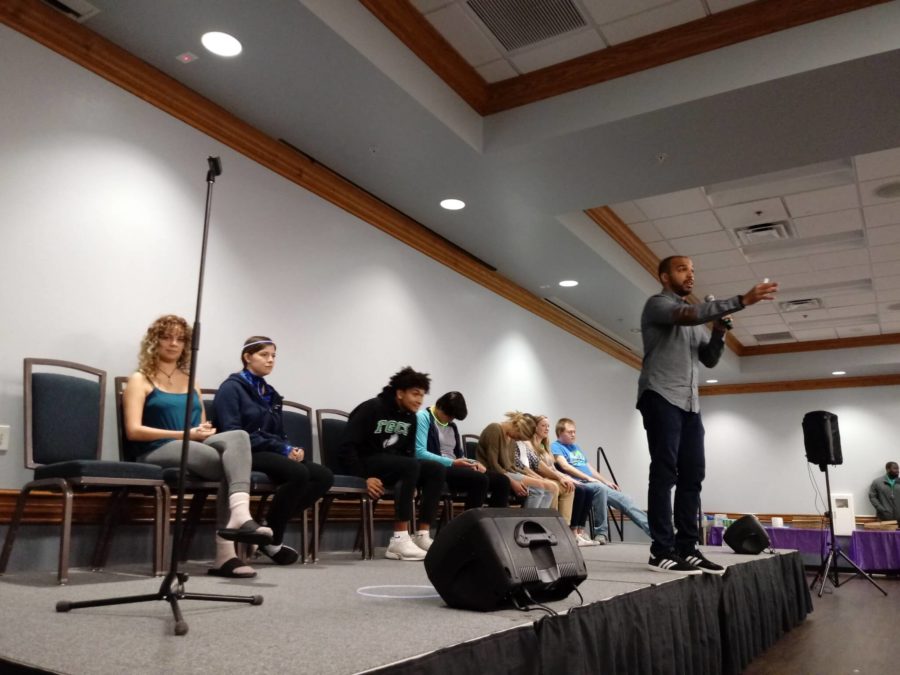 “Anyone can be hypnotized,” Chris Jones said to a full ballroom in the Cohen Center.  “You can just replace ‘hypnosis’ and put in the word ‘zoned in’ or ‘entranced’.” With eyes locked on him, he begins the show by reminiscing on quirky anecdotes from his hypnotizing career, including being accused of being Satan.

Yes, hypnotism is how Chris Jones makes a living.

We found Jones at a conference last semester and thought he was a hit and very engaging with the students,” said Celeste Polin, the president of the FGCU programming board. “We thought it was the perfect fit to bring him to campus. And it’s the first week of classes; a good way for students to meet up that’s fun and safe.”

Born and raised in Chicago, Jones has always had a passion for mind tricks. After receiving his masters and beginning his career performing for children, Jones found his calling after an agency came across his videos, giving him a mentor and a chance. This served as a jump-start into his profession as a hypnotist and led to stardom. He has been performing hypnotism for nine years now.

“People write it off like a magic trick; it’s fake. But it’s powerful. It’s real.” Jones said before his performance, during an interview with Eagle News. “I believe anyone can be hypnotized, I just know I can’t get everyone.”

He’s demonstrated his talent over the years, earning him a place on “The Steve Harvey Show” and “America’s Got Talent.” Jones also has a TV show, “Double Take”, which airs on Facebook Watch, where he hypnotizes fans of celebrities so that they cannot recognize their idols and then sits them face to face.

Jones has been a traveling act for 8 years and has visited all 50 states and has been around the world. He aspires to visit 120 different colleges in 2019. FGCU was just one of them.

Jones opened his act at FGCU encouraging the entire audience to participate in an exercise of holding a fist out, closing their eyes and imagining they were each holding a balloon of his or her favorite color. Following the small exercise, with the help of relaxation and soothing phrases spoken on repeat, audience members who became a little too relaxed were hypnotized into falling asleep, which is when the fun began.

A few hypnotized audience members were brought front-and-center to the fun, such as those who were told to grab another audience member and dance like they were at prom, then told they were to be hidden because ‘the police were now crashing the party,’ and even had to avoid wet willies from others who were hypnotized!

“I really enjoyed the show! I thought it was a really cool experience,” Alyceea Marcic, a sophomore, said. “It definitely felt real, whether it really was or wasn’t. I would really advise people to go. 10 out of 10!”

Another performance from those hypnotized in the crowd included dancing to Michael Jackson’s Thriller. Others were convinced they were superheroes and shared their power and super-name. Among these were Disco Man, who can dance and only fix light bulbs; Ms. Salsa, who can make the best salsa in the world; and Mr. Invisible, who becomes invisible when he covers his eyes. Jones closed his act with a final hypnosis that made those who went under believe he was the rapper Drake once he re-entered the ballroom. One of the girls shed a few tears, convinced the celebrity was truly in the room! The night closed with an eruption of applause from the room.

“I would give it an eight-and-a-half out of 10, just because I could tell some people were faking,” Cherita White, a fellow FGCU student, said. “It was very fun and interactive. He should definitely come back again.”

Responding to the popular assumption that hypnosis is a scam, Jones said that it’s used for more reasons than one might think. “It’s used for losing weight, to quit smoking… women have used it for child birth, I’m not kidding,” He said. “If people still don’t believe, if you want to read, check out the peer-reviewed information about it on Google Scholar. Or you can ask your friends who got hypnotized what it felt like.”

FGCU Programming Board plans to have two #MeToo speakers on campus this February and a comedian perform sometime in April.