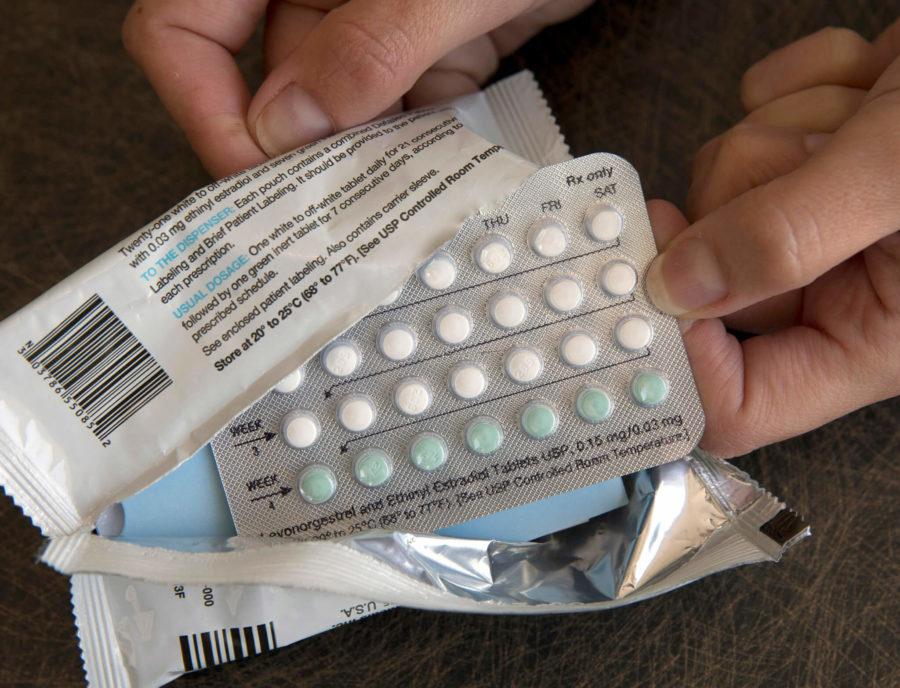 FILE - In this Aug. 26, 2016, file photo, a one-month dosage of hormonal birth control pills is displayed in Sacramento, Calif. Millions of American women are receiving birth control at no cost to them through workplace health plans, the result of the Obama-era Affordable Care Act, which expanded access to contraception. (AP Photo/Rich Pedroncelli, File)

By Craig Burchill
Copy Editor
A new option to prevent unwanted pregnancy may soon be on the market.
Dimethandrolone undecanoate (or DMAU) is a newly developed male birth control to be taken orally. DMAU is currently being tested on volunteers at the University of Washington (UW).
At the time, there is no pill-based form of male birth control on the market to reduce sperm production. Options for males currently available are limited to condoms, vasectomies or withdrawal. Orally taken forms of birth control, as of right now, are only effective and distributed to females.
“Besides condoms, which are uncomfortable, there are few reliable ways for guys to prevent pregnancies,” said Jesse Gold, a sexually active male graduate of Florida Gulf Coast University.
Developed by the National Institutes for Health, DMAU is proposed to give another option for couples to help prevent unwanted pregnancy.
Previously conceived forms of male birth control have not gotten far into development for a number of reasons, including negative side effects and required number of daily doses.
“Compared to what has previously been used, DMAU looks more promising,” said Arthi Thirumalai, a co-investigator for the study being conducted at UW. “In terms of side effects, DMAU is so far more favorable.”
“In our tests so far, DMAU has not caused any significant liver inflammation or had any effect on red blood cell or prostate androgen count,” Thirumalai said. “Prior oral options have had problems in these cases.”
This is not to say that taking DMAU has not had any side effects on males. The highest dosage group reported mild changes in libido, increased acne, and a slight weight gain as a result of testing, according to Thirumalai.
“A lot of female options share the same side effects,” Thirumalai said.
“When I hear about options for male birth control, I get concerned about possible side effects,” Gold said. “If I was sure they weren’t significant; I would be interested in that option.”
Another significant advantage of the DMAU pill versus others put forward prior is that it would only require one dosage a day instead of two or more.
“In the past, options that were effective needed to be dosed two to three times a day,” Thirumalai explained. “The acceptance rate goes down with more required doses.”
An important consideration regarding DMAU moving forward is if there would be enough of a market of males and couples for a mass distribution of the pill.
“If it was cheap and had only minor side effects, I would take it,” Gold said. “Taking a pill once a day would be easy to remember and I would be trustworthy for girls.”
The study taking place at the University of Washington also included a hypothetical survey, which asked males if they would take a male birth control pill.
“Over 70% of men said yes,” Thirumalai said. “40-50% said they would prefer a pill over other formulations.”
When women were polled if they would rely on their partners, the majority who were in a couple said they would trust their men to take birth control, according to Thirumalai.
“My boyfriend and I have sex all the time. Most of the time he uses the pull-out method, which worries me,” said Brooke Oliveaux, a junior at FGCU. “I don’t want to take birth control because I don’t like the side effects it has on me. If he could take his own form of birth control, I would trust him to stay consistent and I would be a lot more comfortable.”
Taking DMAU would also not have an effect on couples’ pleasure while having intercourse. Often times options such as male and female condoms, cervical caps, and diaphragms are said to reduce stimulation. This can be a reason why couples choose to skip forms of contraception, which can lead to a pregnancy.
“I hate using condoms, and I know my friends do too,” Gold said. “If I didn’t have to, and didn’t have to worry about accidentally getting someone pregnant, I would be a lot less paranoid.”
“I don’t use condoms because I don’t like how they feel when I’m having sex,” Oliveaux said. “But because that leaves me worried; I have had a couple pregnancy scares.”
DMAU is not meant to be the perfect form of contraception. Its developers are aiming for DMAU, if it proves successful, to be another possible option for couples to choose according to preference.
“The hope is, down the road, men will have a variety of options to choose from,” Thirumalai said. “This is so that men can tailor it to how they respond.”
Every couple is different. Therefore, every couple has their own preferences when it comes to preventing pregnancy. With 40% of pregnancies around the world being unintended, according to Thirumalai, more options on the market for prevention may reduce the rate.
“The hope is to have birth control options for both in a couple so they have the best chance to prevent an unwanted pregnancy.” Thirumalai said.
“The worst thing that could happen in my life is getting someone pregnant.” Gold said. “A birth control pill for men would be a game changer.”