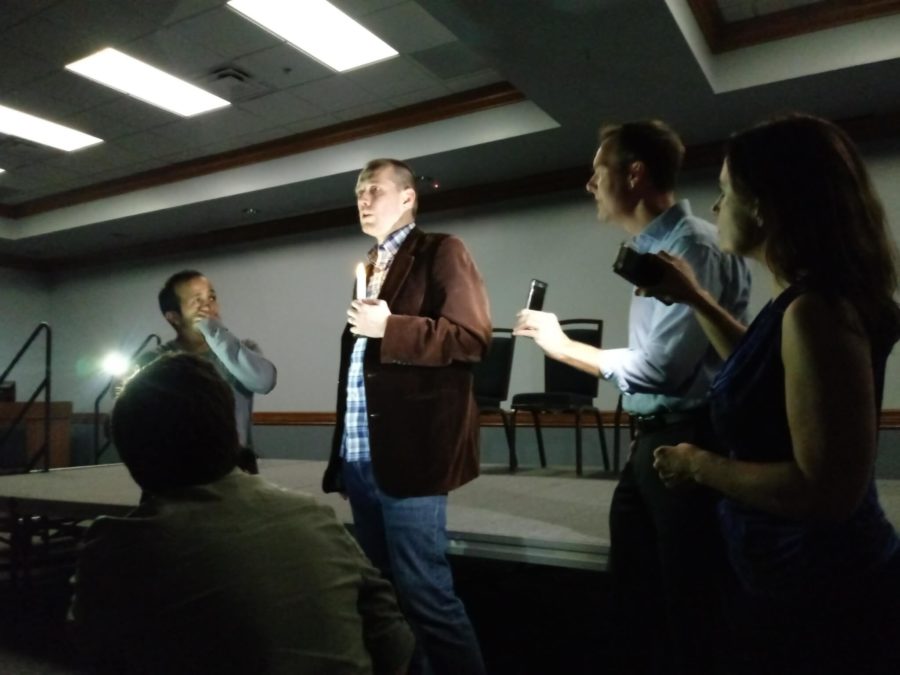 EN Photo by Trinia Oliver // Withers with his improv group “talking with ghosts” during the performance.

The lights were dimmed in the Cohen Center ballroom for a performance titled Paranormal Comedy, on Nov. 8. The performers were Terry Withers and a three actors from Baltimore Improv Group.
Following their entrance, Withers introduced himself as a “very unique and one-of-a-kind psychic.”
“I wasn’t born this way this,” Withers said, leading into the origin story of his powers where he was struck by lightning twice, caught on fire, hit his head on a pipe and lost consciousness.
“And that’s what gave me psychic powers!” Withers said.
The improv act, which Terry joked would be more paranormal than comedy, was a lighthearted way to end a Thursday evening.
Following Withers’ comical introduction, he and his crew interacted with audience members throughout their performance. His crew followed him around with lights for special effect as Withers guessed things about audience members. The performance was composed of multiple stories.
One of them was about makeup that turned users into werewolves, a man with two personalities (called Greg and Stickler) reminiscent of Jekyll and Hyde, and more. According to Katie Johnson, a student and director of live entertainment for FGCU’s Programming Board, Withers has an aspiration to travel around the world and perform improv comedy.