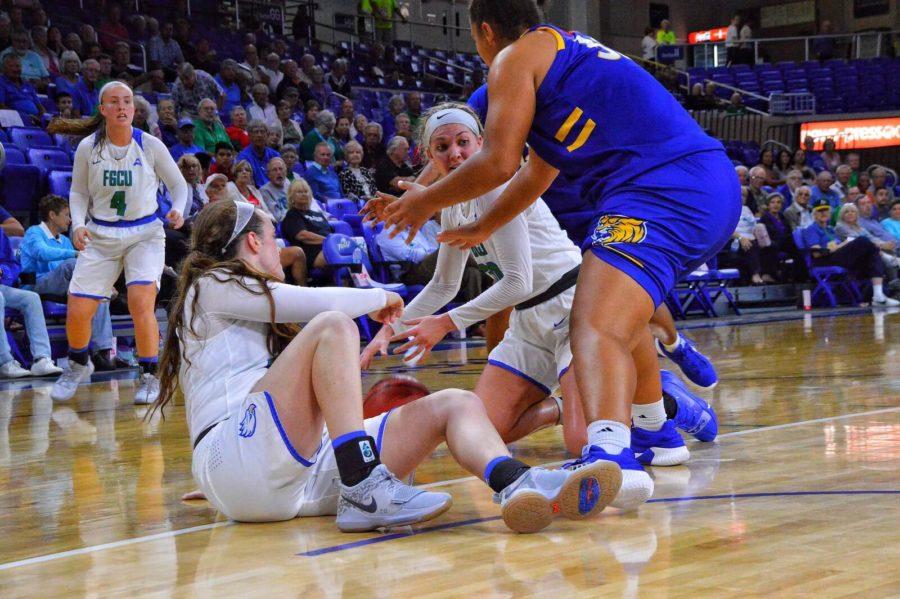 The FGCU women’s basketball team lived up to its slogan and made it rain threes in a Sunday afternoon game against UNF. This win was the teams sixth game in a row, maintaining its undefeated conference record.

Forty two of FGCU’s points came from behind the three-point line, with six Eagles scoring three-pointers for 14 total. Chandler Ryan led the way, scoring five of the 14 during her 18 minutes played.

The game itself got off to a slow start, with a layup by Jewett-Giles giving the Eagles a two-point lead for the first few minutes.

No more goals were made until halfway through the first when Giles sunk a three, effectively beginning a 10-0 run by FGCU, only ending with a field goal by UNF’s Dasha Eremeeva to put the Osprey’s on the scoreboard.

The first quarter itself was dominated by defense, with the Eagles forcing seven turnovers and adding four steals in the first ten minutes. The Osprey defense forced two turnovers and added a steal.

The second quarter began with a bang for FGCU, with Chandler Ryan finding the net from behind the three-point line for her first points of the game and the beginning of a short 4-0 run for the Eagles.

The next ten minutes certainly saw more offensive action than the first, and there was no shortage of goals being scored.

The second half started with FGCU’s largest lead yet, doubling the Ospreys 17 points with 34 points on the scoreboard. Nasrin Ulel got the ball rolling with two three-pointers in a row, giving the Eagles momentum to build up the scoreboard.

The Ospreys delivered on their side as well, however, not letting the Eagles begin a what could have been a game-ending run.

The third quarter saw no shortage of three-pointers, with six goals scored behind the three-point line, half of them coming from Ryan.

Though going into the quarter down by more than double their own points, the Ospreys showed no resistance until the very end of the game.

UNF scored 19 points throughout the final ten minutes as opposed to FGCU’s 16, though most of the Eagles’ points came towards the final two minutes.

“I thought it was a really good performance,” said FGCU head coach Karl Smesko. “We got off to a slow start offensively, but our defense was excellent so we were able to get a little bit of a lead early just because we were executing on the defensive side of the ball.”

Next, the Eagles will travel to Newark, New Jersey to continue conference play against NJIT on Tuesday, Jan. 29 at 7 p.m.