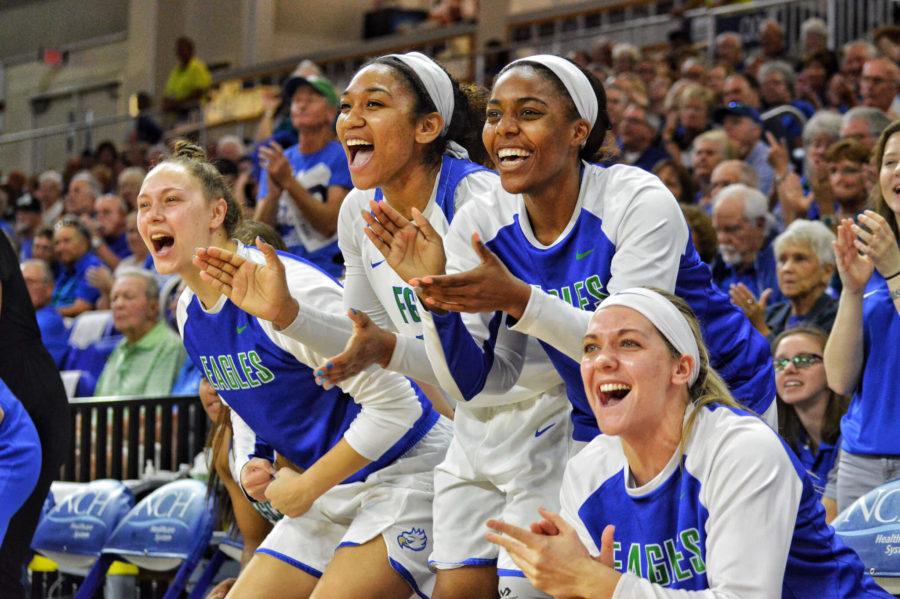 By Alyssa Delia and Jordyn Matez

While the game began with a bucket from Jacksonville, FGCU found its momentum early on and went on a 10-0 run to secure a comfortable lead.

The Dolphins retaliated, however, with a three-point performance by Brown to get them within three points of the lead by the end of the first.

Ulel continued to lead the Eagles offensively with 12 points. Brown earned 16 of the Dolphins’ points.

At the beginning of the second quarter FGCU was only up by three points, but managed to pull back ahead and held a 15-point lead at one point in the quarter.

With Destiny Washington holding up the defensive edge with seven rebounds, the Eagles retained their lead 60-46 by the end of the third.

Ulel remained dominant, leading the Eagles offensively with a total of 20 points. Keri Jewett-Giles and Zderadicka both added 14 and 13 points, respectively.

The third quarter also featured a 17-5 run by the Eagles, largely dominated by layups from Zderadicka and multiple three-point field goals from Jewett-Giles.

In the fourth quarter FGCU was able to achieve a 24 point lead thanks to the strong defense shown by Washington and Tytionia Adderly, who got nine and five rebounds, respectively.

“This was a very tough game, a very physical game,” FGCU head coach Karl Smesko said. “I thought Jacksonville played very well. They really crushed the offensive boards on us and that was something we wanted to emphasize and minimize; I thought they challenged us really well. As for us, I thought we responded well.”

Next, FGCU will be hosting its next conference game against North Alabama on Tuesday, Feb 5. at 7 p.m.