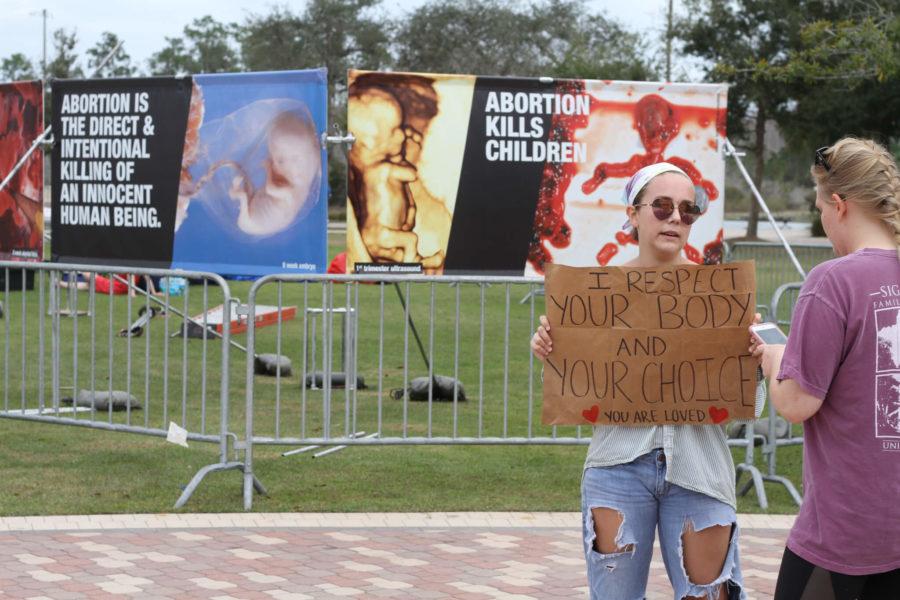 FGCU students spoke out against the Canadian Center for Bioethical Reform’s display of pro-life propaganda on Monday, February 11th.
The Canadian Center for Bioethical Reform (CCBR) covered a quarter of FGCU’s library lawn with metal barricades and over ten signs displaying graphic content of aborted fetuses.  Signs stood taller than eight feet and included phrases such as, “should killing ever be a solution to life’s problems?”
Deborah Gilman, Outreach Director, spoke about the CCBR’s mission. “This is the abortion awareness project. We bring this project over North America; right now, we are focusing on Florida for the next couple weeks,” said Gilman “We are here to discuss human rights with people. Human rights for every member of the human family including preborn children.”
According to Gilman, 24 volunteers from North America helped to bring their message to FGCU.
A single, standing sign stood at the four pathways of the lawn to display a trigger warning for those passing by. However, for some students, the warning was not enough.
Student activists occupied the library lawn to voice their opinions. With a microphone, the activists invited others to come join them in a conversation on stage.
Oona O’Sheehan, a junior at FGCU, walked in quiet protest of the display. O’Sheenhan held a sign reading, “I respect your body, I respect your choice, and I love you” as she walked along the library lawn.
“My friend texted me to let me know not to come to campus today because this hit home really hard for me. She was trying to be sensitive for me. These images are not sensitive and I didn’t want to stay home today. I wanted to come and come with something to say,” said O’Sheehan.
According to Gilman, the CCBR discussed their signage with FGCU prior to conducting the event and it is protected under the First Amendment.
“They are standing up for what they believe in, so I admire that a lot. It’s just different from what I believe,” said O’Sheehan.
Arel Sinett, a sophomore at FGCU, passed by the library lawn and observed the situation. According to Sinett, the CCBR display was like “a state fair of abortion”.
“There are disgusting posters of colors everywhere and there are these metal barriers up like you are waiting for a fair ride, but instead of a ride there people waiting to make you feel shameful about your lifestyle,” said Sinett
Gilman said the CCBR would be traveling to UCF and FIU after FGCU.