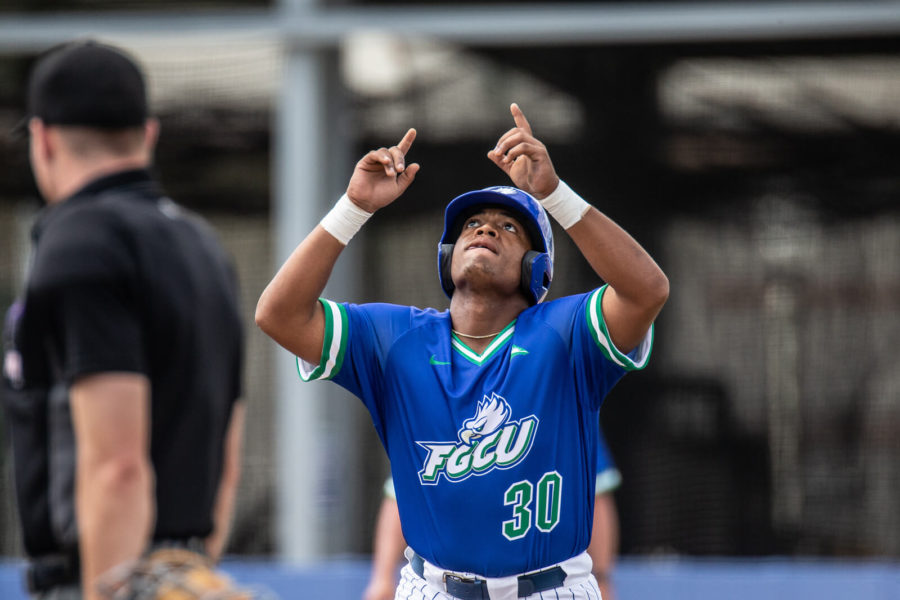 By Jacob Horwitz and Jordyn Matez
The FGCU baseball team opened up its 2019 season with a loss and a pair of wins over Bethune-Cookman University.
While the Eagles dropped the first game 3-6 on Friday, they came back to defeat the Wildcats 23-3 on Saturday and 12-5 on Sunday.
Since FGCU joined the ASUN conference in 2008, the team has maintained an opening game record of 6-5, a batting average of .272 and a scored run differential of nineteen runs.
Pitcher Nikolas Bitner had a successful opening day start on Friday, managing to keep FGCU close in the game. Bitner pitched three strikeouts and allowed two runs, although only one run was earned in his five innings on the mound.
The game got off to a slow start, as the top of the first inning featured two strikeouts by Bitner and a ground out to third base.
Excitement began to pick up in the second half of the inning as the Wildcats’ center fielder made two impressive back-to-back catches from Marc Coffers and Richie Garcia.
The game continued to intensify, as this same inning featured the first hit of the game – a solid hit to right field by Alex Brait. The Wildcats’ pitcher was able to escape this inning, however, via strikeout of Kohl Gilmore in the next at-bat.
The top of the second inning was one for the books. The Wildcats started off the inning with a single and an error, which placed men on first and second with no outs.
Wildcats were then successful in laying down a sacrifice bunt to move both runs into scoring position. The next play was a groundout to shortstop, but the wildcats secured the first run of the game. Bitner made it out of this inning with the next batter grounding out to second.
The bottom of the inning featured a walk and a hit by pitch from Anthony Gonnella and Brian Ellis with one out. Eric Gonzales was then able to tie the game up 1-1 as he hit a double down the line to drive in Gonnella from second base.
Soon after, FGCU took the lead as Ellis scored from third on a wild pitch.

FGCU would not see another hit until the top of the fifth inning.
Bitner gave up two straight walks to the Wildcats, which placed men on first and second with no outs.
The Wildcats were able to lay down another successful bunt to place runners on second and third with one out, leading to a game-tying run.
No more significant hits would occur until the second inning, where the Wildcats had a man on second with two outs, and then the next batter got a base hit to the right side.
A couple of errors by the Eagles caused another run, and the Wildcats took the lead 3-2.
In the top of the eighth, with two outs, pitcher Justin Gill walked two batters and allowed a single to the right side. The Wildcats widened their lead, bringing the score to 5-2.
Eagles now down by three runs late in this game knew that they needed score. In the bottom of the eighth inning, the Eagles loaded the bases with one out, and the Wildcats threw a wild pitch causing FGCU to score a run and bring the score to 5-3.
FGCU would not be able to produce any more runs as we headed into the ninth inning.
In the ninth inning, the Wildcats added another insurance run to make the score 6-3 as FGCU had one last chance to tie or win this game. FGCU would not score any runs in the bottom of the ninth.
Throughout the game, the Eagles had trouble producing enough offense and had only four hits throughout, causing them to fall in their first game.
Seemingly to make up for a weak offensive start to the weekend, FGCU finished up Saturday’s game with 18 hits and 20 RBI’s — the most seen since Apr. of 2017.
Jay Hayes went 4-for-5 on Saturday, scoring two home runs and seven RBI’s.
Hayes would continue to lead the offensive charge into Sunday’s game with a pair of runs due to a home run in the second inning. This was all the Eagles needed to continue the momentum seen on Saturday to score 12 runs on the Wildcats’ five.
“Our bats have been extremely productive these last two days,” FGCU coach Dave Tollett said. “Our 1-2-3 hitters were absolutely awesome today, and we got another big performance from the freshman Joe Kinker. (Richie) Garcia, (Alex) Brait and (Marc) Coffers are our leaders. They have been here awhile, and they did an awesome job of getting this thing going for us.”
Next, FGCU will begin a three-game series against LIU-Brooklyn at home on Friday, Feb. 22 at 6:30 p.m.