The man behind the wheels of FGCU’s car club 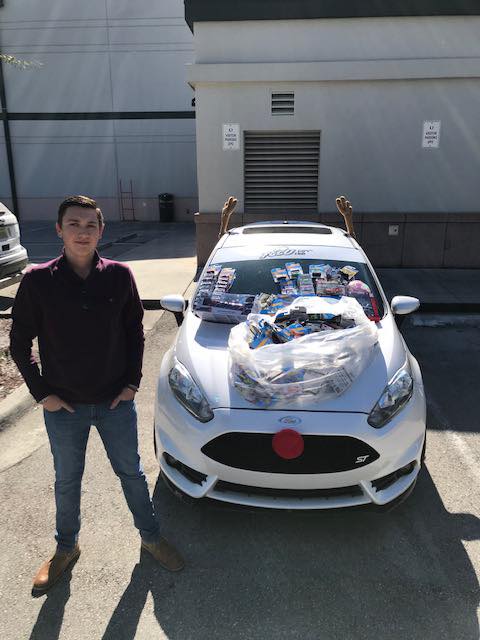 By Randy Paniagua
Gulf Coast News Wire
FGCU’s  campus has over 200 student-lead organizations, but FGCU’s Car Club is gaining exposure and camaraderie.
President Carter Kozminski is making the club the new talk on campus by expanding into community efforts and building a family bond among members that is beyond the common meeting of other clubs.
His duty is not only to unite people with a common love of cars, but to make the club a supporter of the local community. The 20-year-old journalism major from Winnipeg, Canada has transformed the club to one of the university’s most well-known clubs.
“Cars have been in my blood since the day I first ended up on this earth. The club is the natural place for people like me,” Kozminski said.
When Kozminski first arrived at the university, he did not know that there was such a club. He reached out to the club and was surprised that it was looking for a new president. He spoke with the president at the time and was inducted right away.
This gave him the liberty to have an active role in shaping the club.
“Our events went from 15 to 20 people to over 70 people. It‘s incredible to see how the meets grow,” Kozminski said.
While most meetings tend to be indoors, the Car Club chooses to have its meetings surrounded by cars outdoors. The club has designated the top of Garage 1 in the university to be its meeting place.
During the meets, it’s not unusual to see people, cars and pets.
The club has become a family over the years. If a car breaks down or has issues, they all help each other. Kozminski says that he’s been on Interstate 75 helping a member because that’s what the club is about.
Kozminski attributes his love of cars to his father who is also a car enthusiast.
Ice Cream Tuesday meets are where the club’s member go to a local ice cream store and meet. This also happens to be the most attended meeting.
“I feel very welcome and invited to share the same passion as everyone else,” said Jamie Van Rinsvelt, the treasurer of the club.
Rinsvelt says that thanks to Kozminski’s leadership, the club has focused on helping an important cause.
To help the local community, the club partnered with the American Heart Association for its annual motor show. The partnership has garnered over $4,600. This year they raised $2,500.
“We are always grateful to any organization that helps move our mission,” said Nicole Menendez, Heart Walk director for Lee County’s AHA.
Stress is not uncommon leading up to the Car Club’s motor show. Kozminski makes several calls throughout the week to verify if certain participants are going to show their cars. He said that he deals with the stress by knowing that the event helps the community.
Social media has facilitated Kozminski’s reach to the larger community of car enthusiasts outside of campus. The club’s Facebook group has over 400 members that consist of alumni, members and other car enthusiasts.
“Carter has made the meets inclusive and fun for everyone,” club member Shelby Tavares said. She says that the club has a way of bringing new people out, which makes it easier to interact with each other.
Carter attributes the success of the club to its members and the passion they all share.
As graduation becomes a reality for Carter, he hopes the club will continue to grow into a staple of the university.
“This club is a blessing. I found my place at FGCU because of this club. If I could change one thing, I’d find a way to be a part of it forever,” Kozminski said.