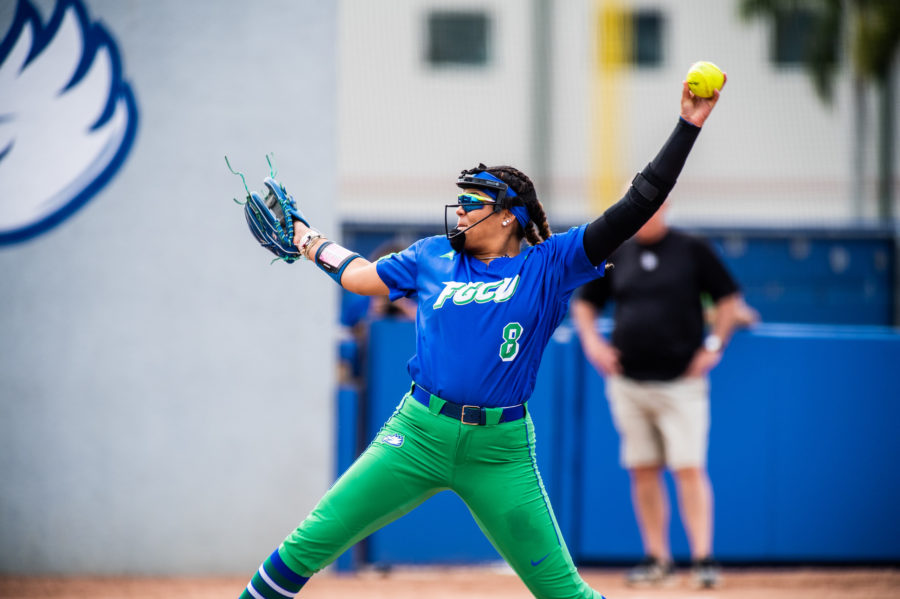 Riley Randolph of FGCU softball throws a pitch in a home-win against LIU-Brooklyn. Randolph earned her ninth career Pitcher of the Week award on Monday, Feb. 25.

The FGCU softball team’s Riley Randolph has been selected as the ASUN conference Pitcher of the Week for the week of Monday, Feb. 25.
This marks the sevenths career Pitcher of the Week award for the senior, who earned the award due to her stellar performance over UConn this past weekend.
Randolph pitched two complete games against UConn and finished with a 0.00 ERA, also reaching a season-high 13 strikeouts against the Huskies on Saturday, where she let up just two hits.
Sunday’s game resulted in nine strikeouts and two hits for Randolph, who retired her first eight batters on the plate.
Thus far into the season, Randolph holds a 5-2 record with a 0.15 ERA and only one run to her name over seven appearances and 47.0 innings.
While she currently stands at No. 11 in the nation in the NCAA ERA standings, the 10 pitchers that rank ahead of her have only thrown a combined 52.2 innings.
“Riley was dominant in both games over the weekend,” said FGCU head coach David Deiros. “She’s been off to a great start this year and we’re looking forward to seeing how the season progresses.”
Randolph will continue to strive for success on the mound in the Eagles’ next match of the season — a double-header against USF in Tampa, Florida on Wednesday, Feb. 27 at 5 p.m. and 7 p.m.