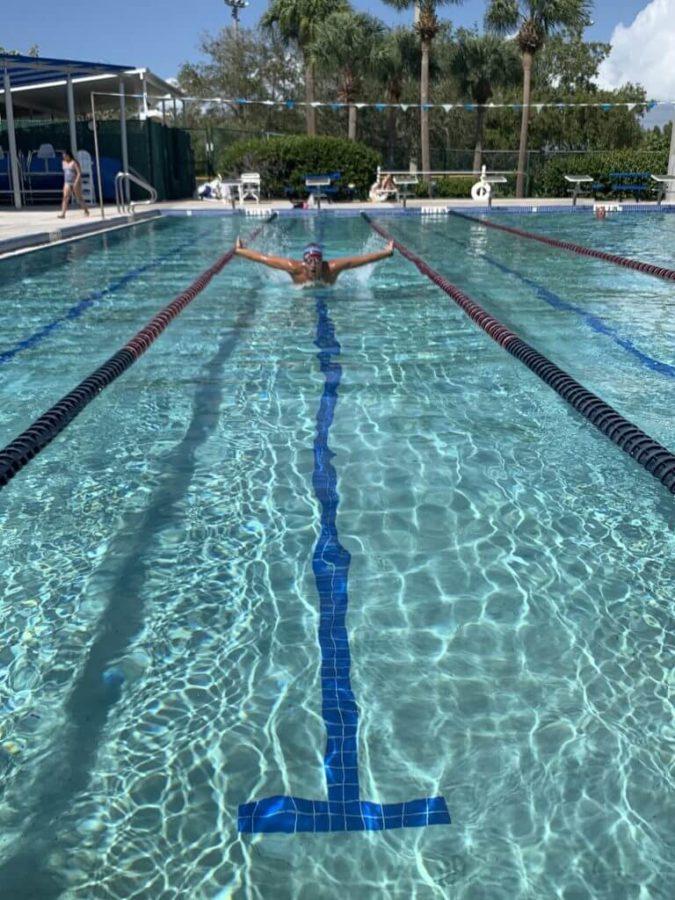 As the 2020 Summer Olympics get closer, Hunter Vos’ chances of competing in them increase.

At 21 years old, Vos has a goal of competing for the U.S. Olympic swim team. The Florida Gulf Coast University student lives a triple life as a professional swimmer, student and lifeguard.

“I like swimming. It’s demanding, but without it, I don’t know where I would be,” Vos said.

His family started to notice that Vos excelled in swimming after winning two national championships in the Netherlands. This garnered the attention of people in the U.S. He was offered a swimming scholarship to Lamar High School in Lamar, Missouri. In 2015, Vos qualified for the USA Swimming team.

Vos was born in the Netherlands to a Dutch father and American mother. He lived in different locations throughout his childhood because of his father’s job. Vos said he enjoys being a dual-citizen. He liked playing other sports, but the weather in the Netherlands led him to choose swimming because the pools were indoors.

“Hunter left the country and his family when he was 15 years old. Being so young, it was hard for the family to adjust be we were supportive of him and his dreams. We are all proud of all that he has accomplished, and we look forward to watching him compete,” said Kathy Vos, his mother.

Since then, he’s devoted all his attention to swimming, specifically the Olympics. Training for the Olympics is both in and out of the water.

Working out is the first thing that Vos does every morning. While most people he knows are sleeping, he’s up at 5 a.m. swimming either in a pool or in the Gulf of Mexico.

The water is cold, but his dedication pushes him to stay in the water. Vos stares at his watch, which tracks the time it has taken him to complete his workout. The goal of today’s workout is to improve his time on both the 50-meter freestyle and 200-meter butterfly.

Vos is currently second in the nation for the 50-meter freestyle and fourth for the 200-meter butterfly.

He said that his workouts typically last three hours split between being in the water and strength training in the gym.

“Hunter is a talented athlete with a bright future. He’s the first one to get in the pool, and the last one to get out,” said Michalis Pantaleon, Vos’ trainer.

Sometimes his swimming is done at the FGCU Aquatics Center. Vos said that he was interested in swimming for a university’s team, but due to regulations, he was not allowed.

When he’s not time-managing his schedule, Vos enjoys spending time sleeping. He said that the number of things he does leave him wanting extra sleep, but by now he’s adjusted to finding comfort in power naps.

The whistle on his lanyard represents one of the many things that Vos does. The sound that comes out of it resembles the sounds he has come to recognize as the beginning of his lap swimming. However, today he’s not competing, instead, he’s teaching.

In Fort Myers Beach, Florida where he now lives, Vos works as a lifeguard. He’s passionate about teaching future generations about the importance of swimming.

The whistle blows and the children start their lap swimming. Vos smiles as he tries to correct the form of the child who’s the last one to make it across the pool. He’s majoring in education at FGCU and after his competitive career is over, he’d like to coach swimmers.

“He is a great asset to our team. He’s dedicated and will make his dream come true,” said Erin Johns, Aquatic Supervisor of the Fort Myers Beach Community Pool.

Johns said that she is hopeful that Vos will reach his goal of competing in the 2020 Summer Olympics. However, she hopes that Vos will not forget about the team of coworkers and friends that support him.

Vos expects to qualify for the Olympic swim team by March 2019.

“I’m very grateful for the support from my family and friends. It keeps me motivated and makes me work harder to achieve my dream,” Vos said.