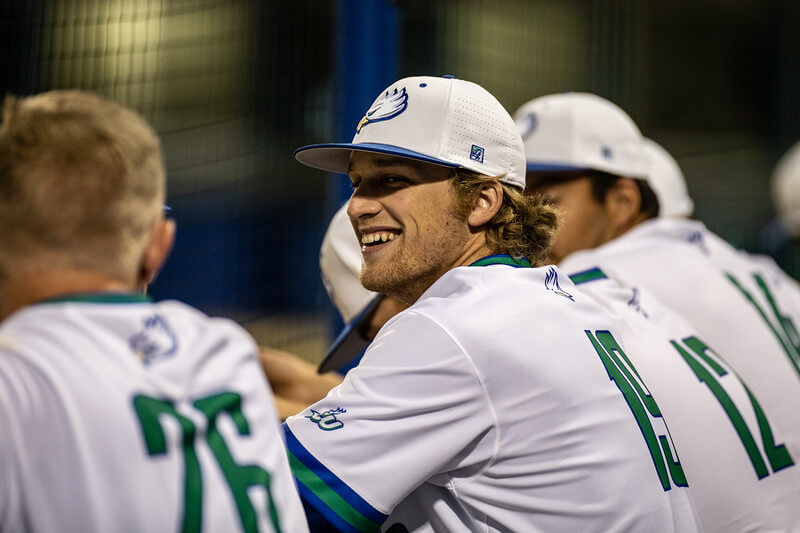 By Jordyn Matez
Sports Editor
The FGCU baseball team took both ASUN weekly awards for the week of Monday, Mar. 11. Evan Lumbert was awarded Pitcher of the Week while Joe Kinker winning Player of the Week.
This is Kinker’s first time taking receiving the honor and Lumbert’s second, with the first award coming in April of 2018 while Lumbert was a junior. This is also FGCU’s first weekly accolades of the season.
Lumbert most recently pitched a perfect season-high seven innings against No. 5 Florida, recording six strikeouts and allowing only one walk. He also held Florida to just two runs, which has only happened to the Gators three other times this season after averaging 14.6 runs over their last five games.
Lubert also struck four consecutive Gators out and had a four-pitch inning in the sixth.
Lumbert is now 2-0 thus far into the season.
“Evan was really, really special. He was completely electric, and all of his pitches were working for him,” FGCU coach Dave Tollett said. “His effort against Florida matched his best performance from when he beat Miami last year.”
As for Kinker, his Player of the Week recognition is due to an impressive effort over Quinnipiac in the team’s three-game series last weekend. This award makes him the first freshman to earn the honor this season.
Kinker hit .500 (8-for-16) overall, also recording seven RBIs and seven runs scored. Kinker, a freshman, hit back-to-back home runs in two separate games against the Bobcats, with Friday’s being a two-run homer and Saturday’s a game-winning grand slam.
In the 16 games he’s appeared in this season, Kinker has achieved at least one hit in all but three, earning him the sixth spot in the nation in batting average for his .481 (26-for-54) average. He stands behind four seniors and one sophomore.
Kinker’s on-base percentage of .592 ranks fourth in the national standings and his 26 hits stands at 15th in the nation.
“Joe was truly a blessing last week with his back-to-back home runs against Quinnipiac and with the way he swung the bat against Florida,” Tollett said. “He’s one of the best hitters on our team already and has been putting up numbers that are on par with the best hitters across the nation.”
Lumbert and Kinker will join the FGCU baseball team in its next series against Rutgers. This game will take place at home from Friday, Mar. 15 through Sunday, Mar. 17.