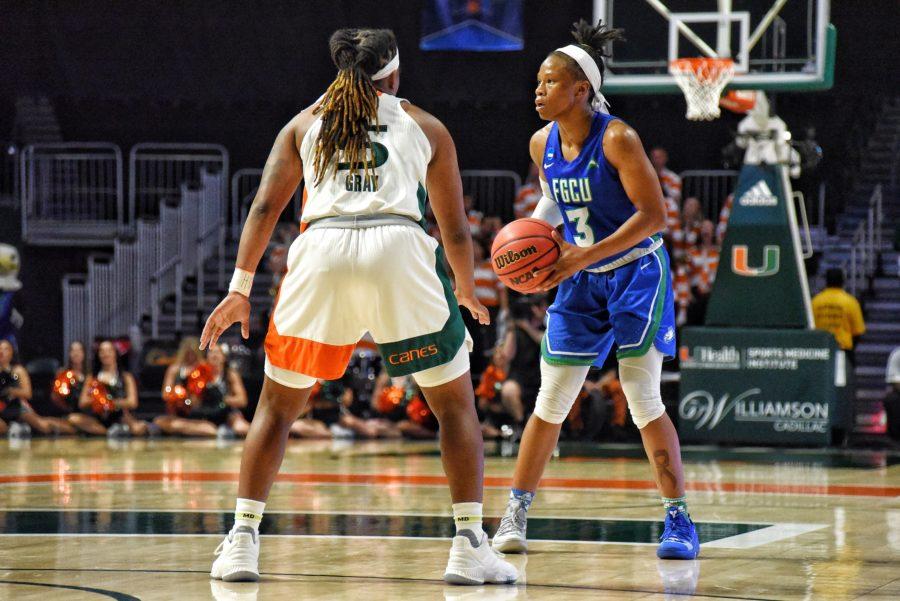 By Jordyn Matez
Sports Editor
FGCU women’s basketball starter Keri Jewett-Giles announced her probable departure out of FGCU Athletics on Friday night, following the team’s NCAA tournament loss against Miami.
If Jewett-Giles were to leave, she would not be eligible to play at another school and will end her career as a college athlete.
“Coach recruited me out of high school and I didn’t make the decision to come, but I’m glad I returned home,” said Jewett-Giles at Saturday’s post-game press conference. “I learned so many things. I’m just glad coach gave me the opportunity to come back. This was, I’ll say, my last game for FGCU.”
Jewett-Giles signed with FGCU in her hometown of Fort Myers following a two-year stunt with Southern Miss. She signed as a junior before the 2017-18 season and utilized a redshirt season to comply with NCAA transfer rules, practicing with the Eagles throughout the season.
In her two years with the Golden Eagles, Jewett-Giles made a lasting impact. She scored 19 points in her very first collegiate game against Alabama State in November of 2015, adding 10 steals and eight rebounds.
She finished the 2015-16 season second on the team with a 45.3 shooting percentage from the field while averaging 7.1 points per game.
She also led Southern Miss in three-pointers, making 39.1 percent of all attempts.
As a sophomore in the 2016-17 season, Jewett-Giles finished third on the team with an average nine points per game.
She racked up 100 assists, 84 rebounds (19 offensive), 63 steals and two blocks, shooting 118-280 (.421 percent) from the field and 22-61 (.361) from 3-point range.
Not only did Jewett-Giles reach a career-high 23 points for the Golden Eagles in February of 2017, she also concluded her final season with Southern Miss with 10 double-figure scoring performances.
Following her redshirt season in 2017-18, Jewett-Giles was a prominent starter and key player throughout the entirety of the 2018-19 season for the Eagles.
She finished the season playing 32 of 33 games, averaging 26.7 minutes per game and 12.8 points per game. The one game she didn’t play was due to a mandatory miss after violating ASUN rules.
Additionally, Jewett-Giles logged a .422 field goal percentage, a .341 3-point field goal percentage and a .702 free-throw percentage.
Most recently, Jewett-Giles scored a game-high 24 points in FGCU’s loss to Miami on Saturday. She did so following a game-high 21 point performance that earned her MVP status at the ASUN conference championships on Mar. 17.
The redshirt junior earned a season-high 28 points over a season-high 40 minutes against Jacksonville in early March and saw three separate season-highs against Miami.
These three came in field goals made (nine), field goal attempts (20) and rebounds (seven).
When asked about his thoughts towards the situation, FGCU head coach Karl Smesko declined to comment.