A season in review: Men’s Basketball 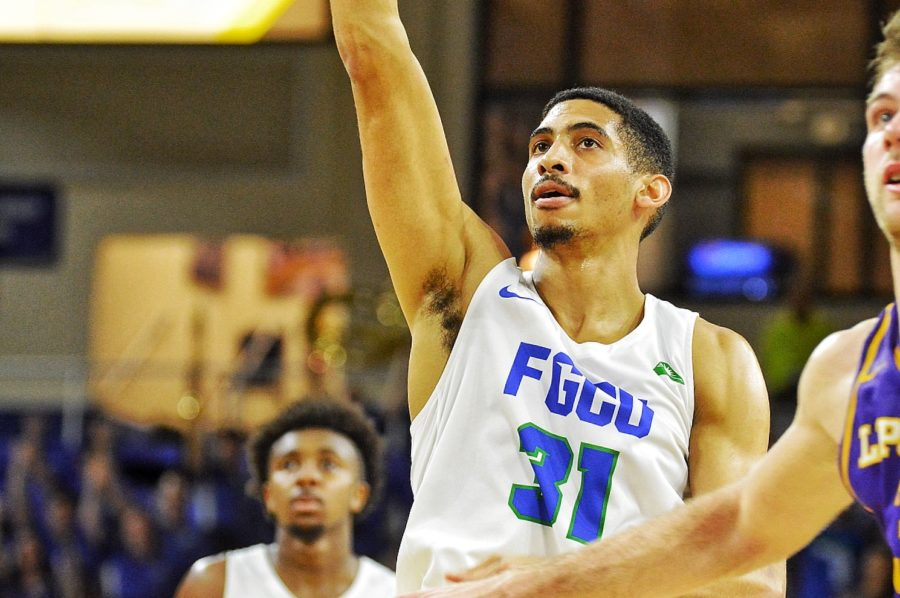 EN Photo by Julia Bonavita // Dinero Mercurius of FGCU men’s basketball releases a shot in the ASUN men’s quarterfinals. The Eagles were defeated by NJIT and eliminated from the ASUN conference championship tournament in early March.

Kyle Grosskopf
Assistant Sports Editor
The FGCU men’s basketball team came into the season with high expectations. The expectations were that FGCU would finish second in the conference behind Lipscomb, both in the coaches and media polls.
The Eagles, however, did not live up to those expectations. The season looked bright with four transfer players and two freshmen added to the roster, but the team couldn’t live up to the hype.
One of those transfers, Haanif Cheatham, came from Marquette as a hardship transfer where he was a two year starter.
At Marquette, Cheatham was a first-team all-freshman and a two-time best defensive player of the year. He was also part of the Preseason All-Conference team.
The other notable transfer, Schadrac Casimir, is a graduate transfer from Iona University. At Iona, Casimir was the MAAC Rookie of the Year where he had a season high of 40 points. He also helped Iona go the NCAA Tournament three years in a row.
Incoming freshman Zach Scott came into FGCU as a two time all-state player that scored over 2,700 points in his high school career.
Even though first time head coach Michael Fly brought in these great players, he also had to replace five of the six top scorers. One of those players was the 2017-2018 ASUN Player of the Year Brandon Goodwin.
Goodwin recently signed a two-way contract with the Denver Nuggets after averaging 23.4 points per game.
Other notable names that were lost were Zach Johnson, who transferred to the University of Miami, and Christian Terrell and Antravious Simmons who both graduated.
Even though the Eagles lost key players, they did have other players return to try and help the team. Dinero Mercurius and RaySean Scott returned for the season as the top two scorers.
To start the season, FGCU struggled on the road going 0-2 against Illinois State and Michigan State. Michigan State is ranked No. 5 in the AP Top-25 and is playing in the NCAA Tournament as a No. 2 seed.
The Eagles looked good at home having a big win over South Dakota State, who have a player that could be drafted this year.
Everything for the Eagles seemed to come crashing down from there. They didn’t have a single win in the Gulf Coast Showcase and lost three straight after that to FAU, FIU and Colgate. Colgate won the Patriot League and made the first round of the NCAA tournament losing to No. 2 seed Tennessee.
The win to stop the losing streak of six total games came against Oral Roberts who finished their season 11-21 and UMBC who finished 21-13.
The next game came against Keiser where the Eagles nearly lost. Things weren’t looking good for the Eagles while injuries and suspensions didn’t help the team either.
Only six Eagles played in more than 30 games and only one Eagle, Casimir, started in more than 30 games.
Cheatham had a season-ending shoulder injury in December while senior Ricky Doyle had a season-injury back injury in January.
The lack of depth didn’t stop the Eagles from trying to be the team everyone expected them to be, but they couldn’t collect the wins as they went on a losing streak that stretched from Dec. 20 through Jan. 19.
The team lost big against Florida, who is a No. 10 seed in the NCAA Tournament, Ole Miss and Liberty, who was a No. 12 seed in the NCAA Tournament.
With a win against Kennesaw State to stop the streak, the Eagles turned the season around to go 9-7 in the conference and earning a No. 4 seed and home-court advantage against NJIT in the first round of the ASUN Tournament.
In previous years, the Eagles did well making it to postseason tournaments every season dating back to the 2015-2016 season, but they couldn’t figure it out losing to NJIT 83-78, ending their season.
The Eagles didn’t live up to expectations that everyone had. They didn’t finish second in the conference, Cheatham didn’t end up with All-Conference accolades, but the team did earn eight weekly awards.
Zach Scott ended up being the player expected of him, playing in all 32 games, starting 21 of them all near the end of the season, averaging almost nine points and three rebounds a game over 22 minutes.
Schadrac Casimir was reliable enough to lead the Eagles in points (17.4) and assists (2.7) a game starting in all 32 games.
Scott and Casimir did end the season on a high note for FGCU with Scott being named to the ASUN All-Freshman Team and Casimir earning ASUN Newcomer of the year and All-ASUN Second Team.
Overall, the Eagles finished the season with their worst performance on record since 2015, but the team can only go up from here with the Eagles landing five recruits for the 2019-2020 season.