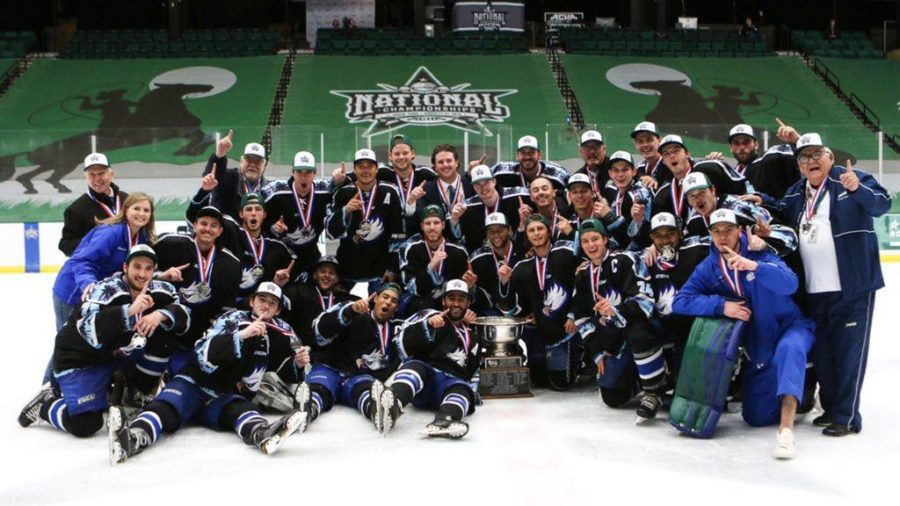 By Keaton Hanley
Contributing Writer
The FGCU D2 hockey team won back-to-back championships with their 4th ACHA D2 National Championship in Dallas, Texas Monday with a 3-1 victory over the Northeastern University Huskies. The championship comes as the third for the Eagles in the last four years. Four players were on all three of the rosters that won: forwards Eddie Leon, Steven Noyes, Trevor Mullaly, and defenseman Jake Leonard.
In route to the victory the Eagles took down Marian University, Utah State University, the University of New Hampshire, and the University of Cincinnati by a combined score of 22-6 in group play.
Three forwards led the Eagles in scoring with eight points apiece: third year player, David Wong (5G 3A), 1st year player, Dylan Cantwell (4G 4A), and second year player, Brandon Beard (3G 5A). All three of the top three scorers for the Eagles in the tournament were the only ones to record a point in the final matchup, each tallying a goal and assist a piece. Eagles’ goaltender, Jordan Bustard, was named tournament MVP, going 4-0 with a .911 SV% and 1.09 GAA.
The Eagles took no time taking the lead, with Brandon Beard scoring 4:55 into the first period. A three-on-one took place after a defensive lapse by the Huskies in their own end and Beard received a pass from Dylan Cantwell while all alone in the slot before going to his backhand and lift the puck over the blocker of Nicholas Kamm.
The Eagles added to their lead with what would be the eventual game winner at 15:31 of the first after a flurry of saves from Jordan Bustard on the other end of the ice. David Wong busted down the left wing all alone on a one-on-one with a Huskies’ defender before taking it to the outside of the left circle and firing a shot along the ice to beat Kamm through his five-hole.
The Eagles scored for a third time to pad their lead with 2:23 to play in the second period off a falling down shot from the slot from Dylan Cantwell. With David Wong along the right side boards he chipped a pass to Cantwell who made his way to the slot and using the defender as a screen he was able to fire a wrister past the glove of Kamm as he was falling to put the Eagles up by three late in the second.
The Huskies were able to break the shutout bid of Jordan Bustard early in the third period, but he shut the door for the remainder of the third making 25 saves on 26 shots with help from a relentless forecheck from the Eagles’ forwards in route to the Eagles 4th National Championship.