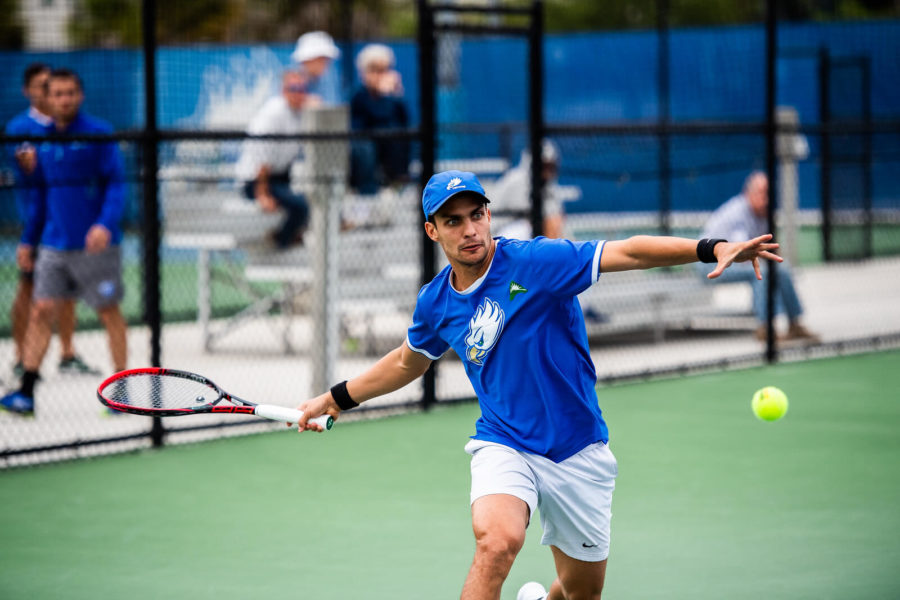 By Kyle Grosskopf
Assistant Sports Editor
The FGCU men’s tennis team beat Lipscomb on April 6 with a final score of 5-2. The Eagles are now 10-8 overall.
FGCU moves to 5-0 in the ASUN conference with its last loss coming from Georgia State on March 20.
The Eagles completed doubles competition winning the point for the fifth straight match. The duo of Marcelo Tebet and Juan Montes got the day started winning 6-1.
Feliksas Sakalauskas and Felipe Ramirez earned the point after winning their set 6-2.
To start singles, Sakalauskas earned his point after winning 6-1, 6-0. Javier Fernandez won both his sets 6-3. Fernandez extended his winning streak to seven matches with the victory.
Felipe Escobar lost in the first set 6-1, but came back in the second set 6-4 to force a third set winning 6-0.
Escobar earned the fourth point for the Eagles to earn the victory, but Tebet earned the final point for the Eagles after he forced a third set winning it 7-5.
“It’s always tough to play Lipscomb at their place,” head coach CJ Weber said. “They fought really hard today and didn’t give up even though we were ahead the whole match. The team overcame some great challenges and I’m really proud of how we are competing. We need to keep focusing on the right things.”
The last time FGCU won five straight conference was the 2015-2016 season. That season, the Eagles finished the regular season undefeated and lost in the ASUN conference tournament.
Up next for the Eagles, they have a two-game homestand against Liberty and Kennesaw State on Thur. April 11 and Sat. April 13.