Forced vaccinations are not unethical 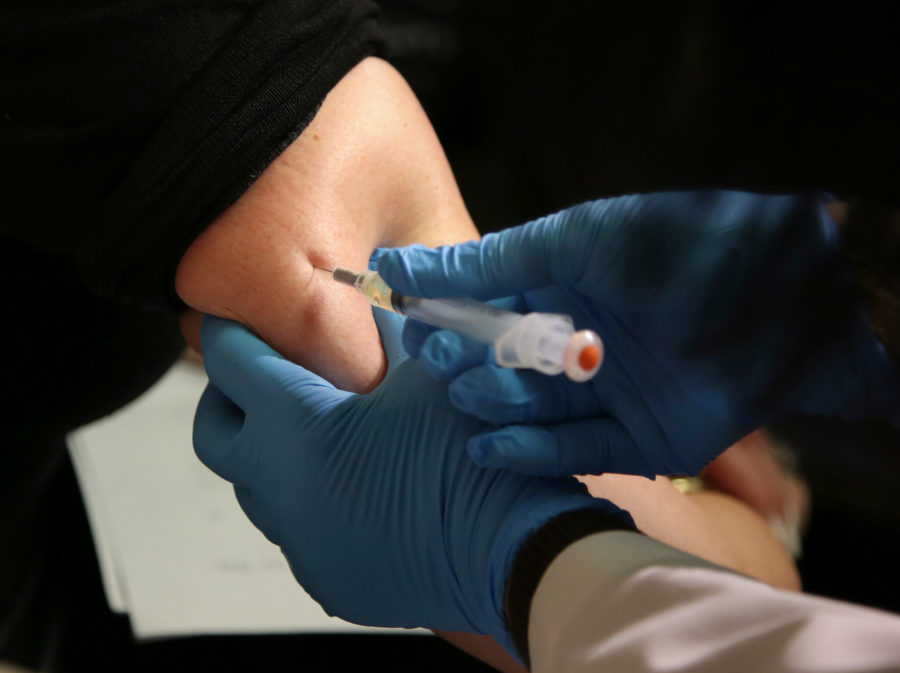 FILE - In this March 27, 2019, file photo, a woman receives a measles, mumps and rubella vaccine at the Rockland County Health Department in Pomona, N.Y. The Centers for Disease Control and Prevention reports that U.S. measles cases have surged this year, and at this pace will set a record for most illnesses in 25 years. Nearly two-thirds of the cases reported have been in New York, and most of those have been unvaccinated people in Orthodox Jewish communities. (AP Photo/Seth Wenig, File)

By Karina Cashman
Staff Writer
The movement against vaccinating children (anti-vax) is one so unfounded in validity that it could be covered in its own article.
In this article, I’m hoping to discuss the developing issue taking place in New York. The cases of measles have sky-rocketed to the point that vaccinations are being made mandatory due to the epidemic being declared a public health emergency. This brings up a larger discussion of how the anti-vax movement is being handled and whether this is a case in which forced vaccinations are acceptable.
The anti-vax movement is based upon misinformation with which discredited doctor Andrew Wakefield claimed there was a correlation between vaccines and autism. His findings were proven to be based upon cut corners and false information, and multitudes of studies have since come out ensuring that vaccines do not cause autism.
As much as I’d love to go on regarding what this says about anti-vax supporters preferring a dead child over an autistic one, I digress. I’m here to talk about the concept of forced vaccinations. Are they acceptable at all, in certain circumstances or never?
I would argue that in cases of a public health emergency, officials should have clearance to authorize a number of things from quarantine to, yes you guessed it, forced vaccination.
Given that there is no credible research backing up the correlation (and I do stress the word correlation over causation –there is a difference) between vaccines and autism, I don’t see an issue with the state of New York’s decision put mandatory vaccines into effect. When public safety becomes a concern, many things that normally wouldn’t be controlled, enforced or restricted have to go out the window.
Those who refuse to vaccinate when mandated “face a misdemeanor charge and could be fined up to $1,000,” according to The Washington Post.
It is worth noting that not everywhere in New York is faced with this vaccination requirement. This rule is only affecting certain areas in Brooklyn, and “persistent refusals would be handled on a ‘case-by-case basis’ with legal counsel,” according to The New York Times.
While the enforcement of vaccinations isn’t as wide-spread as headlines may lead you to believe, it’s still a particularly hot-button issue. Some articles on the subject hint at a fear that this could spread to other states or inflict discord. I would argue that those resisting are most likely doing so based on the false information that the anti-vax movement was founded upon.
As long as the vaccines being mandated are passing all standard requirements for safety, storage and sanitation that are practiced by health officials across the board, then the enforcement is a rare but understandable move on the part of New York officials. With eradicated diseases making a comeback and the prominence of the anti-vax movement not seeming to dwindle in any substantial capacity, it is fair to wonder just how popular this practice may come to be.