Volleyball Starts Season Off With Win Against Akron 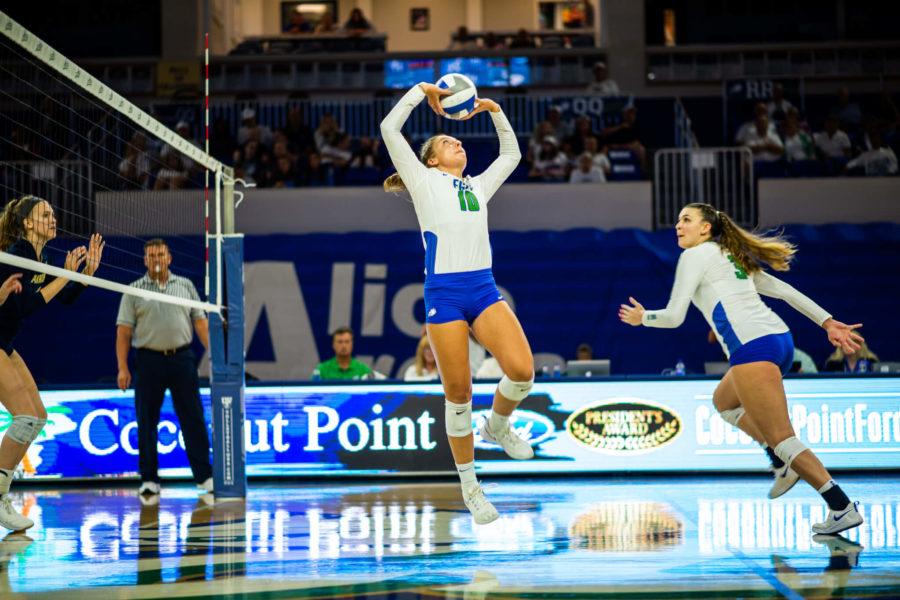 Photo by Brad Young // Chelsey Lockey sets the ball for a hit from Daniele Serrano, who looks to repeat her impressive 2018 season in her final year with the Eagles.

By Harold Solomon IV
Sports Editor
The FGCU women’s volleyball team came out on top in their home season opener against the Akron Zips with a 3-1 set victory to kick off the Homewood Suites Fort Myers Classic.
Coming off a thrilling 2018 campaign, the Eagles picked up right where they left off with strong performances from returning players Cortney VanLiew and Daniele Serrano.
These two players produced 35 combined kills for the Eagles, more than half of the team’s total 60.
FGCU also had helpful contributions from freshman players Aja Jones and Erin Shomaker.
Shomaker and Jones proved they’re players to watch out for throughout the season, made a big impact with nine and seven kills, respectively.
Head Coach Matt Botsford had plenty to be happy about with his team’s victory, especially the performance of his starting freshman.
“Those two did great,” said Botsford.  “It’s tough to come into an environment like this and as talented as they are it’s still a transition, but I thought they did outstanding tonight.”
Botsford also commended returning player Chelsey Lockey, who played a big role tonight with 48 assists throughout four sets.
“I think she did a good job,” Said Botsford. “I think she could be better, but I say that for the whole team. This is the first time she’s running the show, and if you look at the numbers offensively, we hit a high efficiency and that shows she did a good job.”
Coach Botsford and the Eagles hope to continue this momentum throughout the rest of the weekend as they take on Bryant University tomorrow at 11 a.m. and later San Diego State at 7 p.m. to round out the Homewood Suites Fort Myers Classic.