Volleyball Emerges from the Weekend 3-0 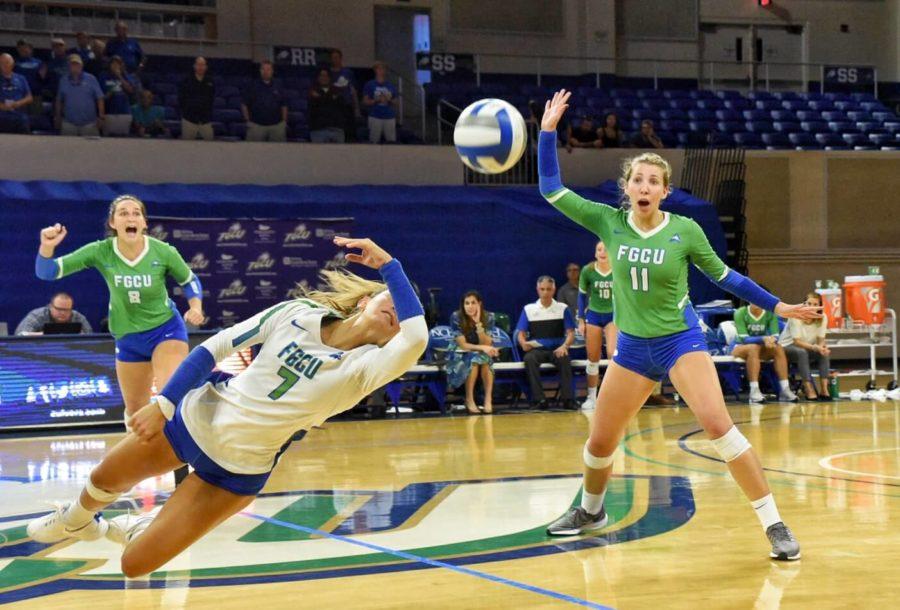 EN Photo by Julia Bonavita // Dana Axner would go onto win MVP honors for her 69 dig performance throughout the Homewood Suites Classic tournament as the Eagles go 3-0.

By Jake Henning and Harold Solomon IV
Co-Sports Editors
FGCU women’s volleyball starts 3-0 for the third time in their Division I era as they cap off Saturday with wins over Bryant University (3-0), and San Diego State (3-2).
Early Saturday, the Eagles took on the Bryant Bulldogs in the first game of their doubleheader.
Cortney VanLiew, junior, looked like a seasoned pro in the teams second outing of the season, leading FGCU in the game with 9 kills.
Freshman Erin Shomaker and Aja Jones continue to prove that they can be vital to this already strong squad, with both players combining to have 13 kills throughout the three sets of play.
This game featured some notable contributions from senior Giovanna Borgiotti and sophomore Tori Morris who had little time on the court in their matchup Friday night against Akron but came up big with five kills from each player.
The Eagles would not drop a set to Bryant, defeating them 3-0.
At 7 p.m. Saturday, the Eagles would take on the San Diego State Aztecs in a match that proved to challenge head coach Matt Botsford and his team.
The Eagles struggled to get a rhythm going in the first set as they only managed a .111 hit percentage against the Aztecs who also made it difficult by contesting the net with three blocks and six block assists.
San Diego State would take the first set 25-22, but the Eagles would respond.
With a consistent rotation of players, the Eagles were able to finally take a set against the Aztecs and win the second set 25-23.
Cortney VanLiew was depended on as she led the team with six points, but the set was capped off with a kill from freshman Erin Shomaker who was assisted by Daniele Serrano to even the score 1-1.
The Eagles would capitalize on their momentum and take the third set of the match 25-23, taking a 2-1 lead over the Aztecs.
This set was highlighted by the play of setter Chelsey Lockey who was able to keep the offense running smoothly with 11 assists, one of which came on the final point from senior Daniele Serrano.
Going into the fourth set, the Eagles continued to rotate in players Alayna Ryan, Shelby Beisner and Snowy Burnam to give San Diego State different looks. Despite this strategy, the Aztecs would go on to take the set 25-22 as the team lead in kills (15) and were able to produce two service aces on the final three serves.
The Eagles would go into the fifth set strong with senior Daniele Serrano giving the team two kills in the early going and an assist on a point from VanLiew but the Aztecs would stick around.
Even with the Aztec’s surge, the Eagles would go onto take the set 15-11. Giovanna Borgiotti came up big for the team with three kills including the final point in the set which was assisted by setter Chelsey Lockey.
The unsung hero of the match for the Eagles was sophomore Dana Axner who had 25 digs against San Diego State’s strong hitters. Axner was named MVP of the tournament as the Eagles would claim the Homewood Suites Fort Myers Classic title.
FGCU women’s volleyball will be on the road the next three weeks with their next matchups against South Florida, Auburn, and George Washington in the Hurricane Invitational hosted by the University of Miami on Sept. 6.