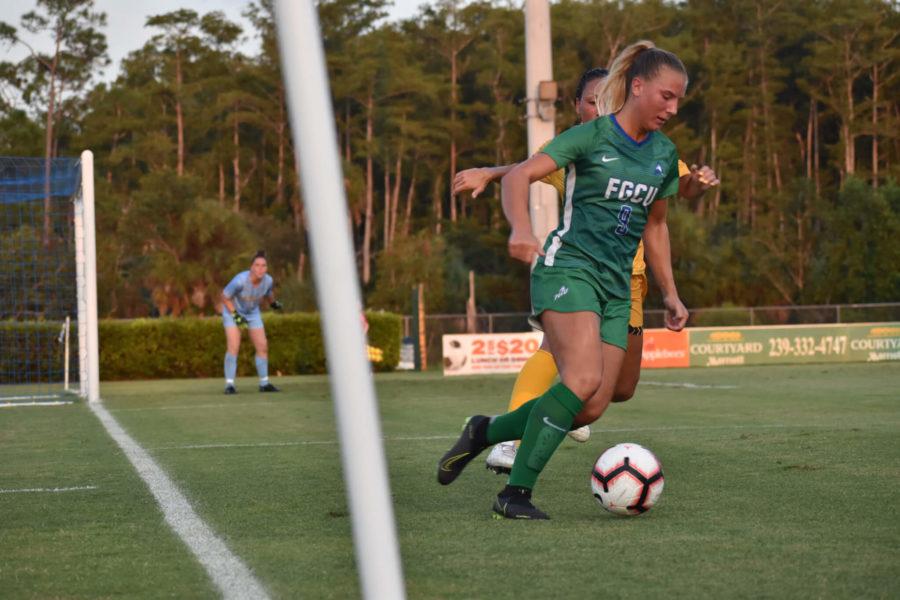 EN Photo by Raphaella Matta. // Freshman forward Louise Lillback was able to keep the Eagles in the game with her score and keep the pressure on La Salle with two more shots on goal.

The FGCU women’s soccer team went down in a tough game against La Salle University 1-2 at home last night.
The Eagles soared in the first half of play with two scoring opportunities into the first 10 minutes of the game and were able to cap off the early pressure with a goal in the 12th minute.
The lone goal for the Eagles came from freshman forward Louise Lillback, who was assisted by sophomore midfielder Ashlee Brentlinger.
The Eagles would go into the halftime break up a goal and looked to add to their 10 shots in the first half and keep La Salle at bay.
Coming out of the break, La Salle would go onto score their two goals in a matter of 10 minutes and held off the Eagles for the rest of regulation.
In the Eagles 1-2 losing effort, Evdokia Popadinova had four shots on goal in the match including two acrobatic shots on net in the form of a bicycle kick and a diving header but La Salle would keep her from scoring.
With their record now 1-2-0 on the season, FGCU women’s soccer now has their focus turned to Northeastern University who they will play against at 5 p.m. this Sunday at home.