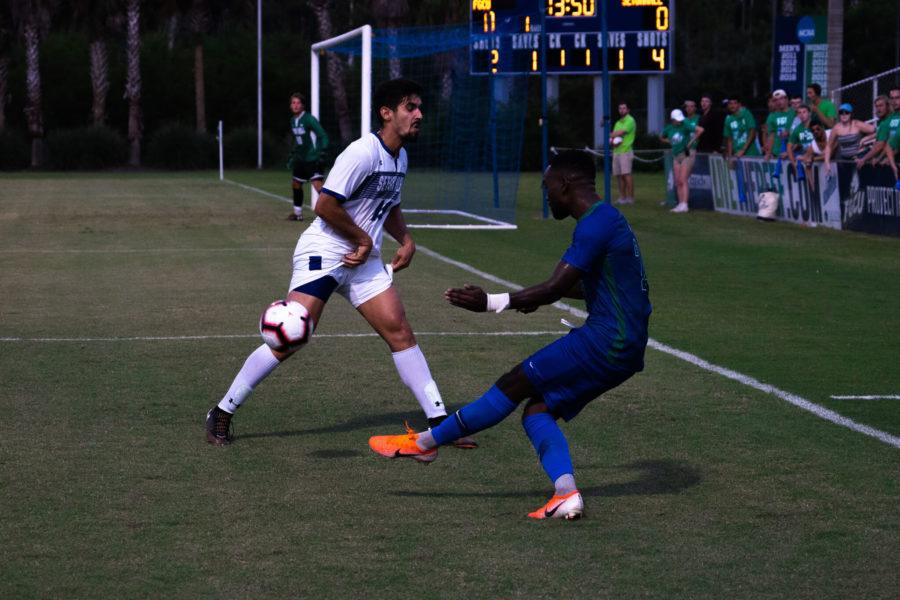 EN Photo by Jacob Pollock // While the Eagles had many scoring opportunities, it wasn't until the final minute of the game where defender Max Edwards would score the game winning goal.

The FGCU men’s soccer team (2-0-1) narrowly edged past Seton Hall 1-0 Friday night. The only goal of the game was scored by junior defender Max Edwards with five seconds left in the game.
“Seton Hall came in with some confidence and they stifled us, so I give them a lot of credit,” said FGCU men’s soccer head coach Jesse Cormier. “In the second half, I saw a switch. We were becoming more dangerous, and we created more opportunities.”
FGCU came out strong in the early going of the matchup, with sophomore forward O’Vonte Mullings putting up the best chance of the first half for the Eagles in the 8th minute.
Throughout the first half, FGCU attempted four shots on Seton Hall, while Seton Hall put up three shots against FGCU redshirt junior goalkeeper Gustavo Vasconcelos.
Despite the consistent attack on both ends of the field, the teams would remain scoreless going into halftime.
To start the second half, the game continued to go back and forth with both teams having fruitful spells of possession. The Eagles benefited from good goalkeeping with Vasconcelos making three saves early on.
FGCU was looking primed to score with a couple of close scoring opportunities with the game winding down, including a shot by senior midfielder Ivan Rosales saved by the Seton Hall goalkeeper at point-blank range, before the game-winning goal scored by Edwards in the 90th minute.
Up next for the Eagles is a quick turnaround with another game at home this Sunday, September 8 at 1 p.m. when they matchup against Georgia Southern.