Eagles Bounce Back Against Northeastern 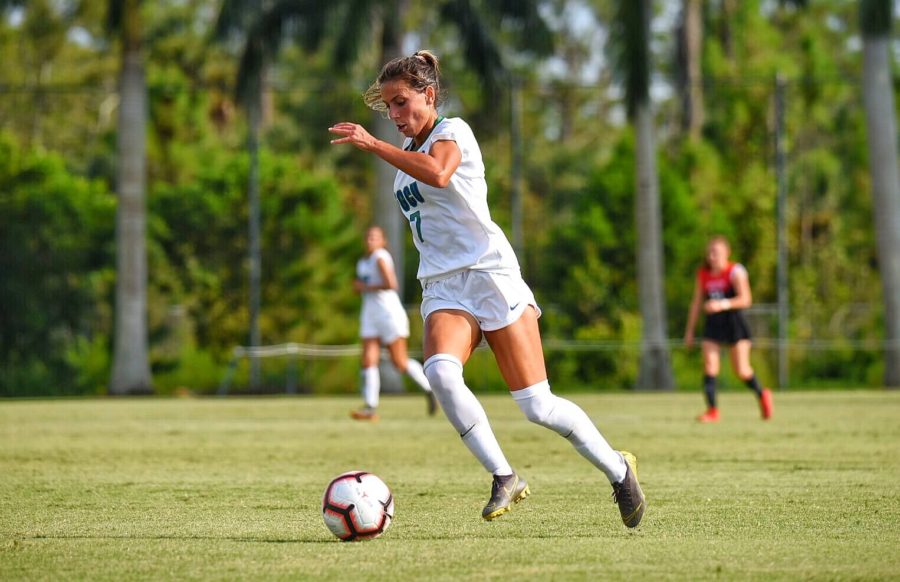 EN Photo by Julia Bonavita // The Eagles were able to secure a win against Northeastern with the help of senior forward Evdokia Popadinova’s early goal in the first half.

By Harold Solomon IV
Sports Editor
The FGCU women’s soccer team (2-2-0) ended the weekend on a high note with a 2-0 victory against Northeastern (2-3-0) at home on Sunday night.
Through the first 15 minutes of play, both the Eagles and Huskies had put a shot on net and it appeared it would be a defensive game. Evdokia Popadinova broke the silence for the Eagles with a score in the 20th minute on a pass from senior Marjorie Boilesen.
Minutes after the FGCU score came an offensive chance from the Huskies but Melissa Weck was able to make a stellar stop with a dive on the ball. The Eagles were able to hold off Northeastern for the remainder of the half and head into the halftime break up 1-0.
Coming out of the break, FGCU continued to drive down the pitch and put shots on net including two coming off the bench from senior Silvana Gordon.
As the game reached the final 10 minutes of play, a free kick presented a prime scoring opportunity for the Eagles. After a beaming kick from senior Opal Curless was blocked by the keeper, sophomore Ashlee Brentlinger was able to clean up and put it in the net for another Eagles score, her second career goal.
With a few minutes left to go in play, Northeastern put a shot on net but senior Melissa Weck was able to hold off the attempt and tally her second shutout of the season. This performance puts Weck only two career shutouts away from taking second place on the Eagles all-time list.
Following this win, the Eagles will hit the road to matchup against the Florida Gators in Gainesville at 6:30 p.m. on Thursday, Sept.12 as they hope to improve upon their 2-2-0 record.