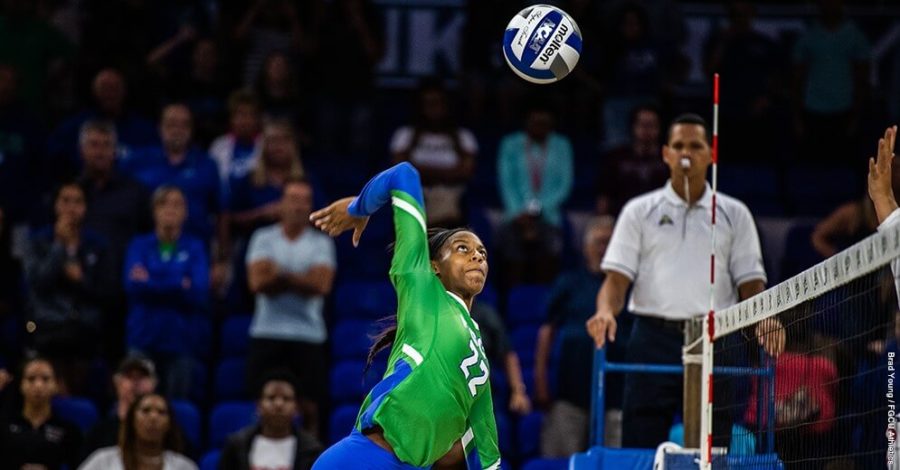 The FGCU women’s volleyball, unfortunately, dropped their first game of the 2019 season, losing (3-0) to the Indiana Hoosiers. This concluded a 19-match regular-season winning streak that FGCU had held since last season.
After getting out to a season-best 6-0 record, the team started the Bluegrass Battle Tournament with a game against Indiana.
In a good effort by the Eagles, Courtney VanLiew led FGCU in both kills and digs, with 12 and 10, respectively.
VanLiew has recorded double-digit kills in every game this season, except for one, where she had nine kills against the Bryant Bulldogs.
“I was pretty disappointed with the execution level (in the first match) as Indiana did a great job dictating play from the service line,” FGCU head coach Matt Botsford. “We were very high error and just couldn’t find much of a rhythm.”
Freshman Erin Shoemaker continued to shine despite the loss, adding seven kills to her already impressive season.
In the second game of the doubleheader, FGCU lost (3-1) to No.15 Kentucky . VanLiew and Shoemaker led the Eagles in kills with 17 and 11, respectively.
In a back and forth game between FGCU and Kentucky, there were 18 ties and eight lead changes throughout all three sets.
“We came out much more focused, and for a majority of the match, our first contact was very efficient. Tori (Morris) played great tonight against a quality opponent, and I loved how we were fighting for every point as a group,” Coach Botsford said. “Kentucky makes it tough to score and there are no easy points, but there were a lot of positives out there that we can build on.”
Chelsea Lockey continued to perform for the Eagles with 41 assists, also adding 14 digs and two blocks, racking up her third double-double of the season.
The Eagles did pick up a win to end the tournament, as they won (3-1) against Cleveland State  to close out the weekend.
Snowy Burnam led the Eagles with 12 kills, also having five blocks and one serving ace.
“Today was one of the better defensive performances I have seen from this group,” FGCU head coach Matt Botsford said. “CSU has some very talented hitters that can really influence the course of a match and I thought the team did a great job of limiting their impact.”
Dana Axner, who had 43 digs and seven assists through three matches, was named to the Bluegrass Battle All-Tournament Team. This is the second time Axner has been named to an All-Tournament Team this season.
FGCU will be back in Florida next weekend as they take on Miami, FAU, and UCF in the Sunshine State Challenge in Orlando starting on Sept. 20.