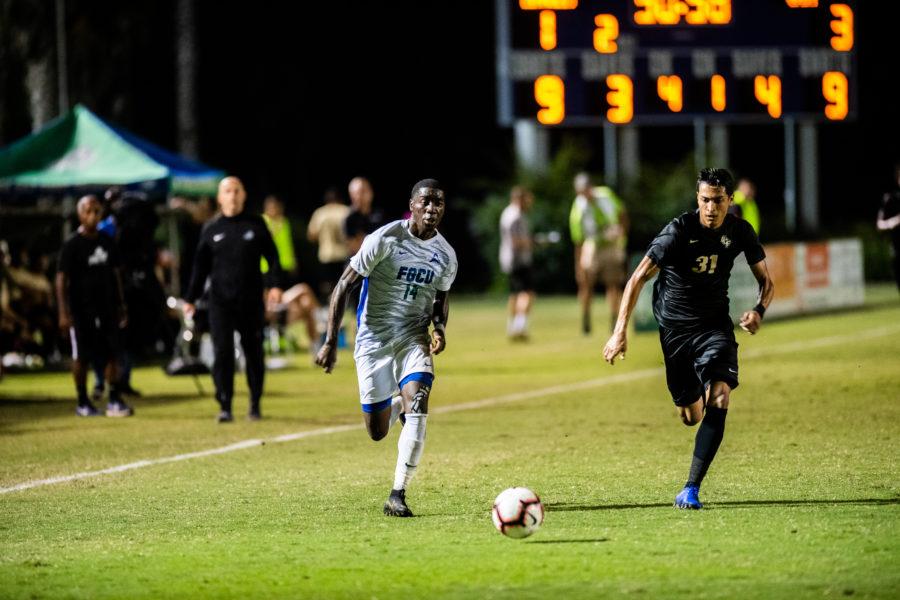 Photo Provided by FGCU Athletics // Shak Adams tallied his first goal of the season for FGCU in the 4-1 home loss to UCF.

By Chase Henry
Staff Writer
The FGCU men’s soccer team (3-3-1) lost against No. 13 University of Central Florida Wednesday night by a score of 4-1.
The opening minutes of the game set the stage for a competitive match with attempts by both teams. UCF gained the advantage with a golden opportunity after passing through FGCU’s defense and tapping in a goal in the fifth minute.
For the next 15 minutes, UCF controlled the game with a high amount of possession resulting in numerous close scoring opportunities.
The Eagles slowly worked their way back into the game. Senior forward Shak Adams craftily dribbled his way past four UCF defenders in their box before having his shot saved by the UCF goalkeeper in the 20th minute of the game.
The momentum kept building for FGCU as sophomore forward O’Vonte Mullings had a prime opportunity to level the game at 1-1, but his header was slightly off target off of a well-struck cross from junior defender Chris Clement.
The game quickly turned sour for FGCU as UCF scored two beautifully worked goals in the 30th minute and the 36th minute that caught the Eagles defense ball watching, and bloomed the Knights lead to 3-0.
The 3-0 deficit did not stop FGCU from trying to score, as the team had a couple more close chances. Senior midfielder Miguel Perez ripped one of the chances right into the hands of the awaiting UCF goalkeeper.
A UCF defender bailed out a goalkeeper error with a goal-line save that kept the score the same, with two minutes left in the first half.
FGCU started the second half putting the pressure on the Knights by pulling off some successful spells of succession. Adams scored his first goal of the season to pull one back for FGCU in the 50th minute.
The pressure shown by FGCU pushed UCF deep into the Knights own territory, but whenever UCF got the chance to counter, their fast, attacking players were able to race forward on a dime.
One of these chances caused some chaos in front of the FGCU goal, but a key save by redshirt junior defender Thomas Delplace kept the scoreline at 3-1 in the 55th minute.
What felt like moments later, UCF was back into the Eagles half of the pitch and forced redshirt junior goalkeeper Gustavo Vasconcelos to make a save in the 59th minute. FGCU raced out from Vasconcelos’s save and got the ball all the way into UCF’s box, but Adams hesitated with the ball at his feet, resulting in a missed scoring opportunity in the 60th minute.
UCF scored their fourth goal of the evening in the 74th minute, which allowed them to try to see off the rest of the game without too much trouble.
The sparks started to fly as the game drew near to the final whistle, as a red card was issued to FGCU senior midfielder Kareem Riley and a UCF defender for an altercation in the 76th minute.
The men’s soccer team’s season continues with a road trip next Wednesday to take on Florida Atlantic University in Boca Raton at 7 p.m.