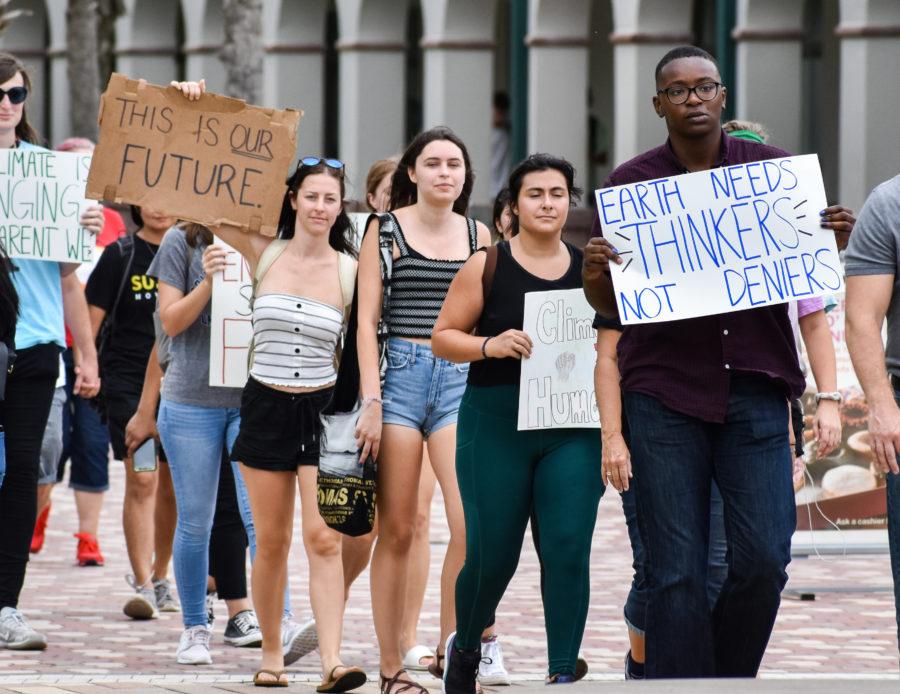 EN Photo by Raphaella Matta. Marchers at the climate change rally at FGCU.

By Nina Mendes
Beat Reporter
Amid what scientists have referred to as a “climate crisis,” students and faculty gathered on FGCU’s library lawn this afternoon to participate in the global climate strike.
Phoebe Clark, an FGCU graduate student, organized the event and arranged several guest speakers to take the stage.
“By coming here today, you are saying that you have had enough, and you will no longer take this lying down,” said Clark. “Now it is time to turn that thought to action. Now is our chance to speak to those who will listen and stand up to those who will not. We are at a turning point in history.”
One of the speakers gave an example of how the Pika, a small mountain-dwelling mammal found in Asia and North America, may be the first endangered species to become extinct due to climate change.
Participants in the walkout gathered at Lutgert Hall before marching down the main walkway of campus at around noon.
Several marchers, including children, held signs encouraging others to lead more sustainable lifestyles and educate themselves about climate change.
“If we are going to make a difference, it has to be us,” said Dr. Edwin Everham, an ecology and environmental studies professor at FGCU. “When you leave here, speak truth to people. Do it with compassion, empathy, and understand the people you are trying to change the minds of have been lied to.”
Xyzo Smith-Pajares, an FGCU student, is a part of an environmental, spiritual activist group called Pachamama Alliance. Smith-Pajares attended the walkout because he believes that raising awareness is the first step to a healthier planet.
“Just being willing to learn and trying to overcome the sense of shyness and anxiety that comes with entering into spaces you are unfamiliar with is key to moving forward,”said Smith-Pajares.
Smith-Pajares says that he limits his carbon footprint by practicing a vegan lifestyle and avoiding single use plastic.
There are several opportunities to get involved on campus and speak about pressing issues like climate change.
FGCU’s GIVE is a study abroad program/club which promotes sustainable living and igniting global citizenship. GIVE spread the word about this event to its members and opened the invitation for all students to attend.
The rally lasted around an hour, and participants remained on the lawn throughout the afternoon discussing ways to lessen the effects of climate change.