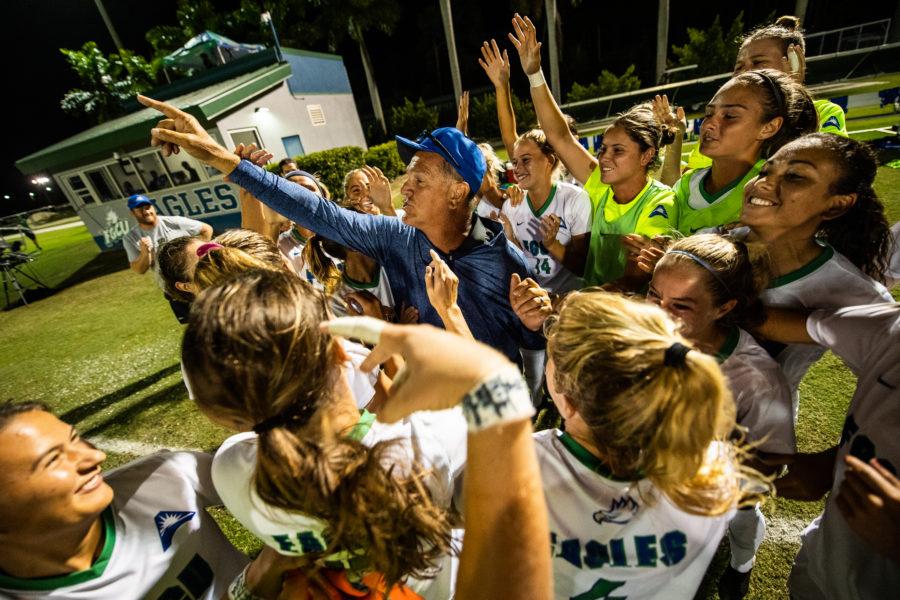 Photo Provided by FGCU Athletics // Head coach Jim Blankenship pickup up his 400th career win as the Eagles took down Creighton in a 2-1 home win.

Written by David Vasquez
Staff Writer
FGCU women’s soccer (4-3-0) took down Creighton (6-2-0) in a thrilling 2-1
victory at home. Along with the Eagles win, head coach Jim Blankenship was able to reach his 400th career victory.
“I’m incredibly proud for our players, I know this win meant a lot to them and this was our best win of the season by far,” said Blankenship. “Creighton played exactly as hard as we thought they would. For our players to step up and meet that challenge was great and will hopefully give us some confidence.”
Senior forward Evdokia Popadinova gave them the lead early as her score came in the 12th minute of the game, her second of the season. Following the FGCU score, Creighton would test senior goalkeeper Melissa Weck with a beaming shot from a distance, but Weck would come away with her first save of the night.
The Eagles dominated the first half, maintaining the shot advantage 10-2 against the Blue Jays.
Senior Marjorie Boilesen and junior Cassidy Morgan each contributed to the shot total as they tested Creighton, but were denied, sending FGCU into halftime with the 1-0 lead.
In the second half, freshman Louise Lillback put the Eagles up 2-0 following her score in the 65th minute. Popadinova would add an assist to her already impressive home outing, as Lillback collected her second career goal in the Green and Blue.
Creighton came into the Friday night matchup outscoring their opponents 14-7 but struggled to build a rhythm consistently against FGCU. In the final 10 minutes of the game, Creighton cut their deficit in half as they scored a goal in the 84th minute.
As the clocked ticked down the Blue Jays tried to even the score, but the Eagles were able to keep them at bay for the 2-1 victory and secured a historic win for head coach Blankenship.
The Eagles will remain at the Nest, as they take on Marshall (2-6-0) for a first time matchup this Sunday, Sept. 22 for a 1 p.m.