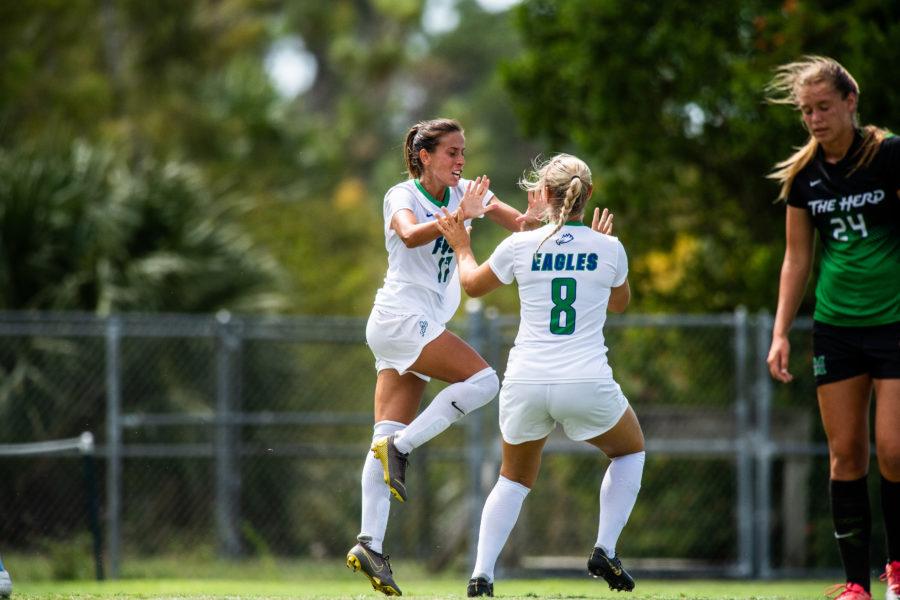 Photo Provided by FGCU Athletics // Evdokia Popadinova's two goals helped FGCU surge past Stetson 3-2 to claim their ninth ASUN regular-season title in the program's history and the No.1 seed in the ASUN championship.

By Cole Potts
Staff Writer
The FGCU women’s soccer team picked up their fifth win of the season early Sunday, as they defeated Marshall (2-7-0) 2-0 with both goals coming from senior Evdokia Popadinova.
With the team closing out their recent set of non-conference games, they picked up their third consecutive win.
“Today was a shutout, a win and an overall great result. Now, we get to focus on starting conference play. I’m pleased with the way we’ve played so far. We had a tough, demanding schedule but we’ve earned some good results. I’m proud of the players and I know they’re excited to move forward,” said head coach Jim Blankenship about their tough schedule so far this season.
With FGCU having ball possession for about 60% of playing time, the back line was able to hold Marshall to only four shots for the entire matchup.
In the 29th minute of the game, Popadinova put up her first score of the game on an unassisted shot to give the Eagles the 1-0 advantage.
The remainder of the first half would be a quiet one for Marshall as they couldn’t respond to the score and only tallied two shots going into the halftime break.
Coming out of the half, the Eagles continued their flurry of offense and looked to add to their lead as Marjorie Boilesen put a shot on net just minutes into the matchup followed by strong attempts from junior Megan Young and Popadinova.
In the 78th minute, Popadinvoa scored her second goal on a header, a chance kickstarted by a pair of passes from Megan Young and junior Syniah Clark. Young and Clark each racked their second assist this season on the Popadinova score as the Eagles would eventually win the match 2-0.
In her brilliant two-score performance, Popadinova sits at four goals on the season and moves to seventh on the all-time scoring list for FGCU with 18 career goals.
Senior goalkeeper Melissa Weck only had to make one save today, as she now has four shutouts on the season, moving her to second on FGCU’s all-time list for career shutouts with 31.4.
FGCU will now start ASUN league play as they play two games on the road versus North Alabama (3-5-0) on Thursday, Sept. 26, and then against reigning ASUN champs Lipscomb on Sunday, Sept. 29.