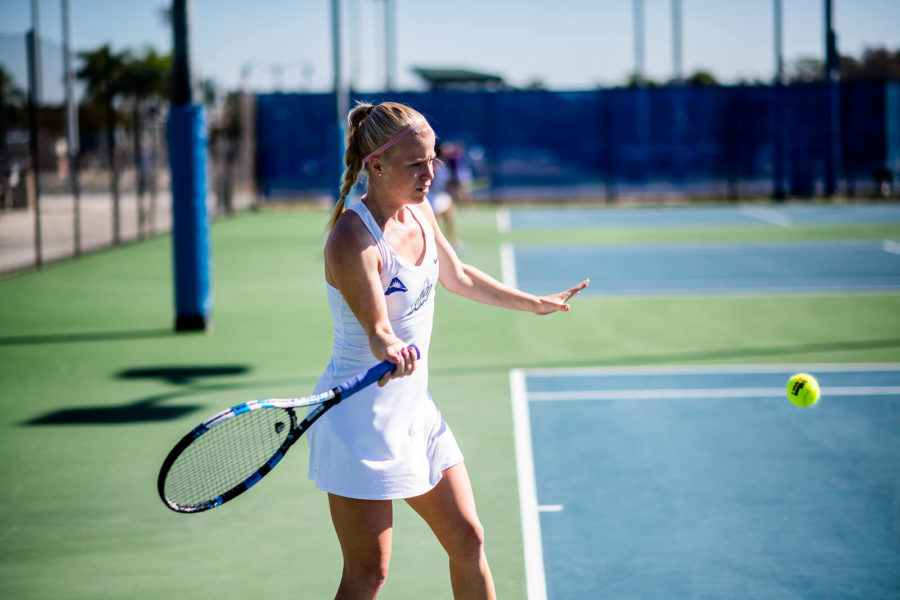 EN Stock Photo // Despite rain cancellations, women's tennis picked up a trio of singles wins and one doubles win in the teams first outing of their fall season.

By Jake Henning
Assistant Sports Editor
The FGCU women’s tennis team started their fall season on Friday, Sept. 20 at the Miami Invite in Coral Gables. While the tournament was planned for the weekend but the team was only able to play Friday due to weather.
Despite the rainouts, the Eagles managed to pick up three singles wins in Friday mornings matchups and they came from Sara Kelly, Lourdes Ramalle, and Alba Retortillo.
Kelly defeated LSU’s Luba Vasilyuk in a three-set tiebreaker (3-6, 7-5, 1-0 (10-8)), while Ramalle went on to win in straight sets against Georgia State’s Mara Pop (6-1, 6-4). Retortillo also would grab a win as she sat down FAU’s Harris Caldwell in straight sets as well (6-2, 6-4), racking up her first collegiate victory.
Ramalle also went on to get a doubles win as she teamed up with freshman Ida Ferding for a 7-6 (8-6) win over Georgia State’s Denisa Gheorghe and Damira Muminovic.
“I’m grateful and thankful to have opened up our fall season this past weekend,” said head coach Courtney Vernon. “Despite the weather only allowing us to compete Friday, I’m glad the ladies got to face some great competition.”
Next up for the Eagles will be hosting the Bedford Cup at the FGCU Tennis Complex, which will start on Friday, Oct. 4.