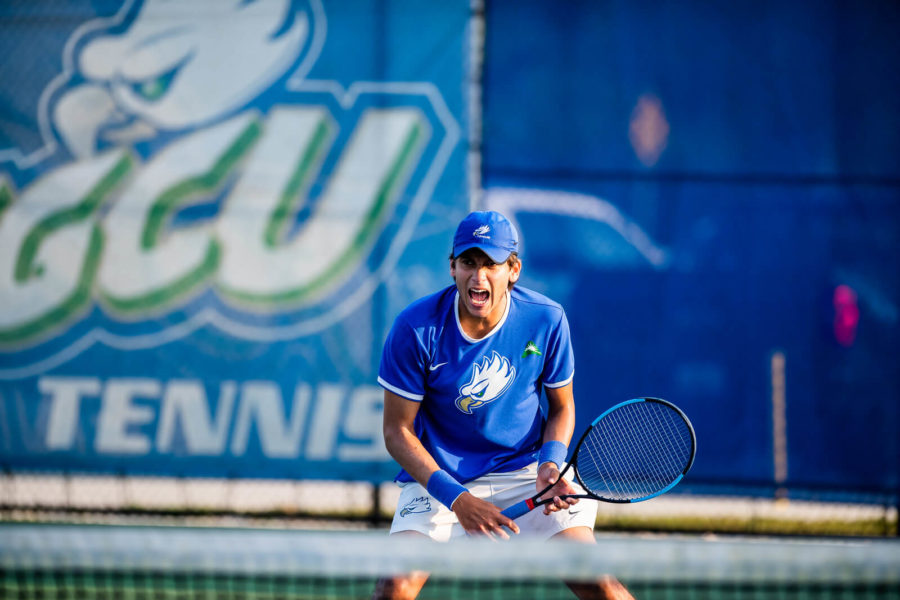 EN Stock Photo // In their first outing of the season, men's tennis impressed as freshman Guglielmo Stefanacci played well in both singles and doubles action.

By Chase Henry
Sports Writer
The FGCU men’s tennis team showed their competitiveness at the Gridiron Classic over the weekend. The tournament, which was held at Mercer University, was the team’s opening tournament for the fall tournament season.
“This competition was a great opening tournament for the season,” said men’s tennis coach CJ Webber. “The competition was tight, and the level of play was high.”
FGCU was represented by seniors Felipe Ramirez and Marcelo Tebet, sophomore Carter Bedford and freshman Guglielmo Stefanacci.
Ramirez had the strongest showing of the team. He was able to advance to the semi-finals in Flight A before having to retire against the eventual champion.
Tebet also put out a good performance by winning in the first round of the tournament but ended up losing in the round of 16.
Tebet’s day was over after this loss because he didn’t qualify for the consolation bracket. Players who lost in the first round were the only players eligible to qualify for the consolation bracket.
Bradford and Stefanacci competed in Flight B in their debut match, and both showed their potential. Bradford lost a competitive 7-6, 7-5 match before being knocked out of the competition in the consolation bracket.
Stefanacci won his first match in a straight-set victory before being knocked out by an opponent who had a first-round bye.
Stefanacci and Tebet earned a first-round bye in doubles action as they ran through the competition until being eliminated in the quarterfinals.
Ramirez and Bradford won all of their matches on the to the quarterfinals in their doubles bracket before being forced to retire from play due to an injury.
“I’m happy that Carter [Bradford] and Gugliemo [Stefanacci] got to see the competition and that Marcelo [Tebet] and Felipe [Ramirez] were able to get their feet wet with some matches,” said Webber. “Now, it’s time to get to work.”
Following this tournament, men’s tennis will have a couple of weeks to prepare before traveling to Tallahassee to compete in the Bedford Cup from Oct. 11-13.