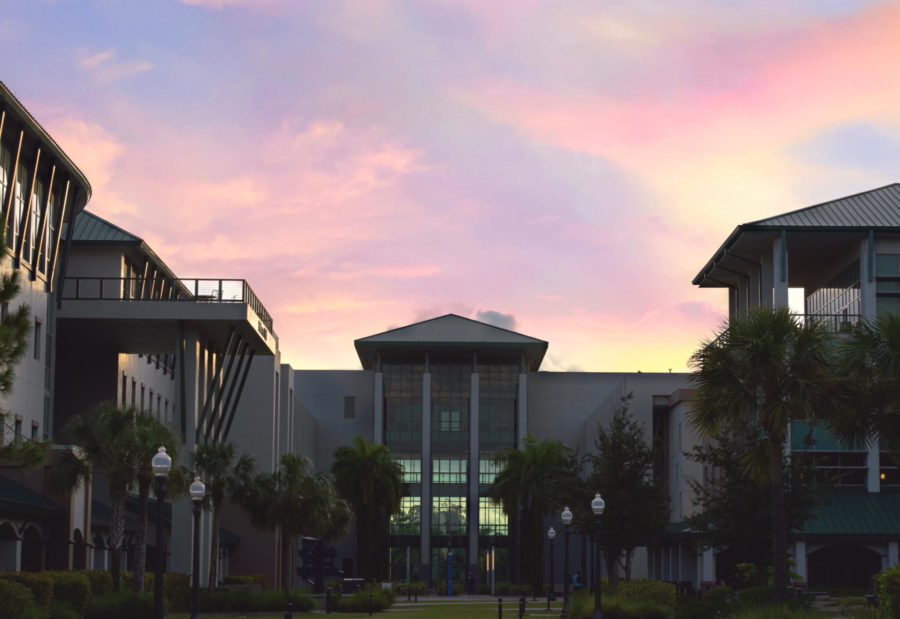 EN Photo by Leah Sankey. A photo of FGCU's campus.

By Samantha Roesler
Opinion Editor
Since 2006, Florida Gulf Coast University has offered a class that is aimed to teach students about a topic that everyone can relate to or will have experience with at some point in their lives- the topic of death and dying.
Diane Cox, a former CEO and President of a local hospice in Naples, came up with the idea for FGCU to have a class about death and dying.
“I approached the dean and asked if I could teach the class,” Cox said. “I had a lot of experience with death and dying through my hospice experience and I thought it would be a good idea to teach about it.”
This course is under the name of “Issues in Culture and Society: Death and Dying.” It is a course offered through FGCU’s Integrated Studies Program and is taken by many students who are looking for a higher-level elective.
Some of the main lectures in the class are based on understanding and recognizing the impact of dying, how to care for people that are dying, death through the eyes of a child, and how to cope with the loss of a pet.
“It’s a pretty dark class,” student Fabian Pesantes said. “But (Cox) has a different type of energy. How do you have such a positive energy about this topic?”
Cox emphasized the idea of wanting her students to not fear death. “Almost everyone is scared of dying- and that’s okay as long as it’s a healthy fear,” Cox said. “But people shouldn’t be afraid to talk about it.”
Pesantes isn’t the only student in Cox’s class that has noticed the surprisingly positive approach to the course.
“I like that this is a class where you can speak on your own beliefs and experiences, so you can learn from both the professors and others,” student Cedric Dunham said. “Overall, I think it is a good environment to speak and learn.”
The death and dying class is heavily focused on group discussions and students are asked to watch movies and read books related to dying from perspectives that range from children to the elderly.
“At the end of the course I ask everyone to write a critique on the class and the material we cover,” Cox said. “I would sometimes get a couple people share with me different movie ideas, but overall the response has been positive.”
Even though it is only week five of the semester, students in the class have already realized how beneficial this course can be in their future lives.
“I was a person who didn’t want to talk about death because I didn’t know what would come afterwards and I was afraid of that,” Dunham said. “I hadn’t really experienced a close death in my family, but I wanted to know how to deal with those situations.”
The death and dying course is offered this semester twice a week at 9 a.m., and the early class time hasn’t stopped students from wanting to participate.
“A couple times so far it has opened my mind way too much for 9 a.m.,” Pesantes said.  “But I do have some family that is close to death so the things we talk about relate to me. This keeps it interesting.”
Students have said that the discussion-based atmosphere makes getting up early worth it.
“I believe the entire class setup helps with the flow of the class and actually makes me excited to show up- even if it’s at 9am,” Dunham said.
On Rate My Professor, a site where students can write their opinions on a class for students to reference when picking future courses, all the ratings on the death and dying class were positive. One review in particular focused on how the class helped with personal issues that have spurred from death-
“… (Cox) was very inspiring and helped very much with my own personal life issues with death. She was honest, real and upfront. Probably my favorite class I’ve taken so far, I’d recommend her and the class, it was an experience!”
Not only has the class help students to cope with past death experiences, Cox said that her class has set students up for success in the future. When asked if she has had past students contact her with questions or advice, Cox said she can’t count the number of times it’s happened.
“Students that were in my 2006 class contact me asking for different materials,” Cox said. “I had a student a while ago- she’s a mother now. She contacted me because she wants the materials I used for my child lecture.”
Current students say that it is important for potential future class-takers to keep an open mind during the lectures.
“Don’t be quick to judge,” Dunham said. “Share your experiences because this can help you better understand them. Ask the questions you have. It’s a class about dying, so there are many questions about it.”
The Issues in Culture and Society course offers different topics throughout the year such as yoga theory or the influence of media on culture, but there is no question as to why the death and dying topic gets the most attention.
“The main thing is that what I teach, they’re life lessons,” Cox said. “They don’t end once the semester ends. That’s one of the great things about this class.”