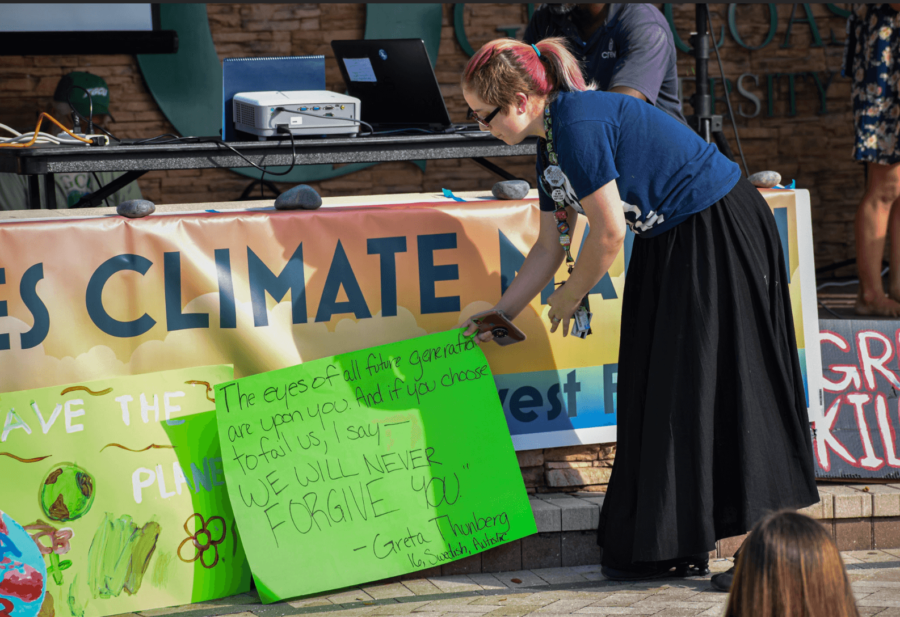 EN Photo by Raphaella Matta. An attendee places a sign on the ground with a quote from Greta Thunburg.

By Serena Tartaglia
Contributing Writer
The People’s Climate March, inspired by dozens of others across the country, hit the FGCU Campus on Sept. 27.
According to the official agenda, the organizers of the event are credited as follows: AJ Amendure, Colby Brownell, Krister Martinez, Allison Mertz, Rachel Brown, Xylo Smith-Pajares, Brain Terenna, Vincent Zaleski.
Before the march began at 4:00 p.m. on the library lawn, local political organizations, such as NextGen, an organization dedicated to registering young voters, and Sunrise, a global organization that pressures politicians to acknowledge climate change and to stop accepting corporate money from fossil fuel industries.
The first 25 minutes of the event were dominated by sign-making and students networking with political organizations.
AJ Amendure, a leader in the local Anonymous chapter and an activist who has organized the People’s Climate March for the past five years, welcomed the crowd. Then, a stirring audio message from climate activist Greta Thunberg brought tears to many protesters’ eyes. Thunberg urged people to protect our planet, restore land that had been overdeveloped by humans, and fund organizations dedicated to saving the environment.
Some of the attendees expressed enthusiastic support for the Green New Deal. “I think that if we’re in a crisis, we need to make every effort to fight it. Everybody needs to be drafted, in a sense,” Said Rachel Brown, a representative for Sunrise.
Speakers, including Cindy Nayer, leader in the local ACLU, implored listeners to vote. “This is the biggest existential crisis of our lives,” she said.
“If we don’t do something now, we won’t have a future,” said Aria Taylor, a protestor, “and the generations after us won’t have one at all.”
At 5:25, the march began in earnest, which lasted until 5:50. The aforementioned event organizers spoke, and Brown broke into song: “Occupy” by Rising Appalachia, a song about the short-lived Occupy Wall Street Movement of 2011.  The last two hours of the march were occupied by the Marimba Percussion Performance, and a Meditation for Peace session.