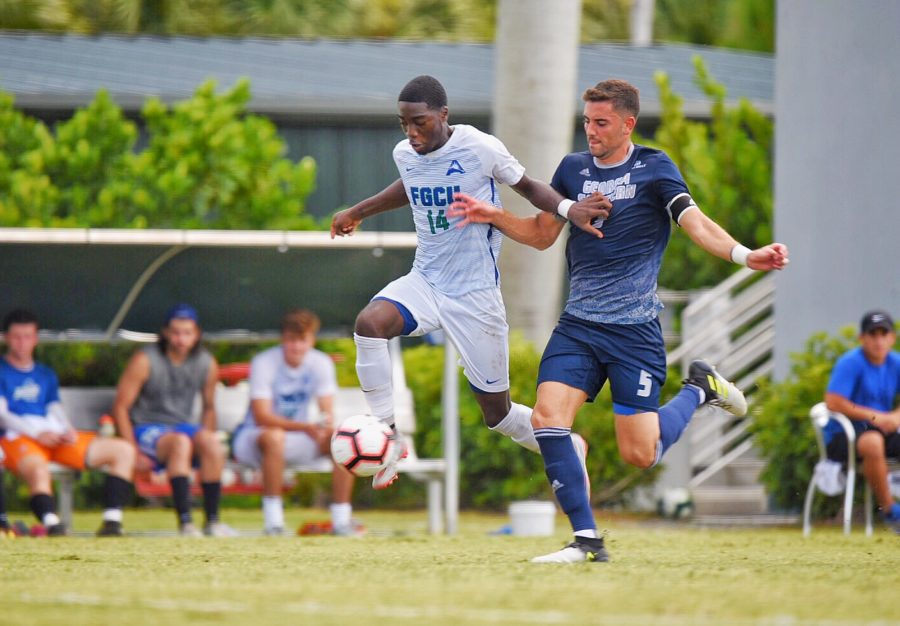 EN Photo by Julia Bonavita // O’Vonte Mullings helped the Eagles break their losing streak against Lipscomb with a two-goal performance on Saturday night.

By Chase Henry
Staff Writer
The FGCU men’s soccer team (4-5-2) prevailed over Lipscomb University, Saturday evening, by a score of 3-2 behind a brace from sophomore forward O’Vonte Mullings.
It was clear when play began that both teams would be using different styles in their game plan for the 90 minutes. FGCU favored a possession-based attack with articulate buildup play, while Lipscomb focused on a hyper-aggressive press tactic, which allowed them the ability to try to get behind the Eagles defense on counter-attacks.
Lipscomb showed their tactics in the first minute when Bisons forward Louis Robinson was shown a yellow card by the referee after he appeared to lose a foot race to an FGCU defender inside of the Eagles’ box and committed to bringing the defender down by a slide tackle from behind.
For the first fifteen minutes of the match, the Eagles seemed to have difficulty in connecting their passes because of Lipscomb’s high-energy press.
The first goal-scoring of the night came for FGCU came in the 15th minute from senior midfielder Ivan Rosales. Rosales’s shot didn’t find the back of the net, as it went wide of the goal.
FGCU then was able to exploit some space given from the Bisons press in the 18th minute, when senior midfielder Ryan Medilah received a pass from junior defender Titouan Le Menec overlapping down the right-wing. Medilah then squared a pass straight to Mullings, who was waiting with space in the Lipscomb penalty box.
Mullings appeared to get too much under the ball, as the ball went flying over the crossbar and resulted in the game staying at 0-0.
Medilah continued to overlap and the measure paid off in the 23rd minute. Medilah skipped around a Bisons’ player and was able to find Mullings, who again was able to find open space in the Bisons box.
Mullings composure prevailed this time around, as he calmly slotted it past the Lipscomb goalkeeper to give FGCU the first lead of the night.
The next 20 minutes showed FGCU having no issue at creating chances, as the Eagles rattled off three shots before freshman forward Aiden Jokomba scored in the 42nd minute.
Lipscomb’s fullbacks pushed up the field, and FGCU had gained the ball back in the midfield. Redshirt junior Noah Bushey then received the ball with space to run, so he and Jokomba outpaced the Bison’s exposed center halves before Bushey tapped the ball to his right into the direction of Jokomba who slotted it into the back of the net.
Coming back into the game after halftime, it looked like much of the same, as both teams insisted on keeping their initial game plans. FGCU put up two shots within the first five minutes of the start of the second half.
Lipscomb’s press strategy started clicking and a long ball up to the Bisons midfielder Killian Byrne saw Lipscomb pull one goal back in the 58th minute.
After Lipscomb’s goal, FGCU appeared to be running out of options as the Bisons seemed to gain momentum and insert themselves back into the game.
The play in the game became more choppy during the period after Lipscomb scored before FGCU made a key change by bringing on junior Michael Luke and Bushey on the 74th minute. Luke’s and Bushey’s energy seemed to make a difference, and enabled the Eagles to regain control of the match, as four shots were put up on the Bisons goal.
Mullings scored his second goal of the night in the 81st minute, and it looked to be the insurance goal FGCU could use to see the game out. It was a beautifully worked goal, as junior defender Chris Clement found Bushey open near the halfway line, who found Mullings running in behind the Lipscomb defense and converted a one-on-one chance past the Bisons goalkeeper.
Just as FGCU was trying to close out the game, the end of the game saw sparks start to fly and tempers start to flare. Lipscomb’s Ryan Doherty scored a goal from an assist by Louis Robinson in the 89th minute. As Doherty was running back to the halfway line, Doherty and some FGCU players got into an altercation, which saw both teams crowd around each other to defend each team’s player. Doherty was given a yellow card by the referee for his actions.
At the kickoff, Lipscomb pushed for a third goal equalizer, but redshirt junior goalkeeper Connor Gavigan saved the shot with 19 seconds remaining to see the Eagles pull out their fourth win of the season.
Up next for the men’s soccer team is a quick turnaround as the team hosts No. 13 Florida International University on Tuesday at 7 p.m.