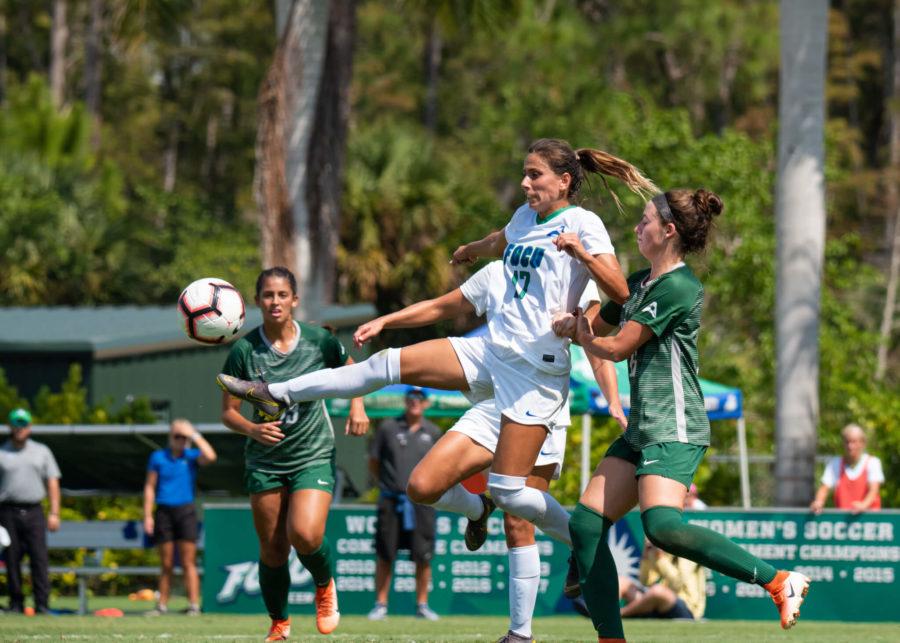 EN Photo by Julia Bonavita // Evdokia Popadinova's two-goal performance pushes the Eagles winning streak to six and puts them in second place in the ASUN standings.

By Cole Potts
Staff Writer
The FGCU women’s soccer team extended their winning streak to six after shutting out Jacksonville 3-0 at home Sunday afternoon. With this victory, the Eagles are now tied for second place in the ASUN standing and remain one of the three unbeaten teams in conference play.
FGCU’s offense was in control of the matchup early as Evdokia Popadinova gave the Eagles their first score of the game in the 8th minute.
The Eagles continued to pound the goalie box until Louise Lillback beamed a shot in the back of the net in the 38th minute, extending the lead to 2-0. Lillback continues to impress in her freshman campaign as she pushes her season score total to five.
FGCU went into halftime outshooting the Dolphins 14-0 along with 9-0 advantage on corner kicks.
Coming out of the break, sophomore Ashlee Brentlinger kept the pressure on the Dolphin’s goalie box with back-to-back shots on goal in the opening minutes of the second half.
In the 56th minute, a penalty in the Jacksonville goalie box allowed Popadinova to collect her second goal of the night with a penalty kick, giving the Green and Blue a 3-0 lead and pushing her to seven goals on the season.
Goalkeepers Melissa Weck and Emily McCue combined for FGCU’s sixth shutout of the season while the offense finished the game outshooting Jacksonville 29-0, their largest margin of the season.
“We’ve been talking a lot to the team about the opportunities that we have at home and how important it is to take care of business here,” said head coach Jim Blankenship. “If we take care of business here, it will set us up to be in the driver’s seat towards the end of the season. I’m happy with today’s result and the way the players competed. Now, we move on to the next one.”
The Eagles will remain at home and try to keep their win streak alive when they face Kennesaw State on Oct. 10 at 7 p.m.