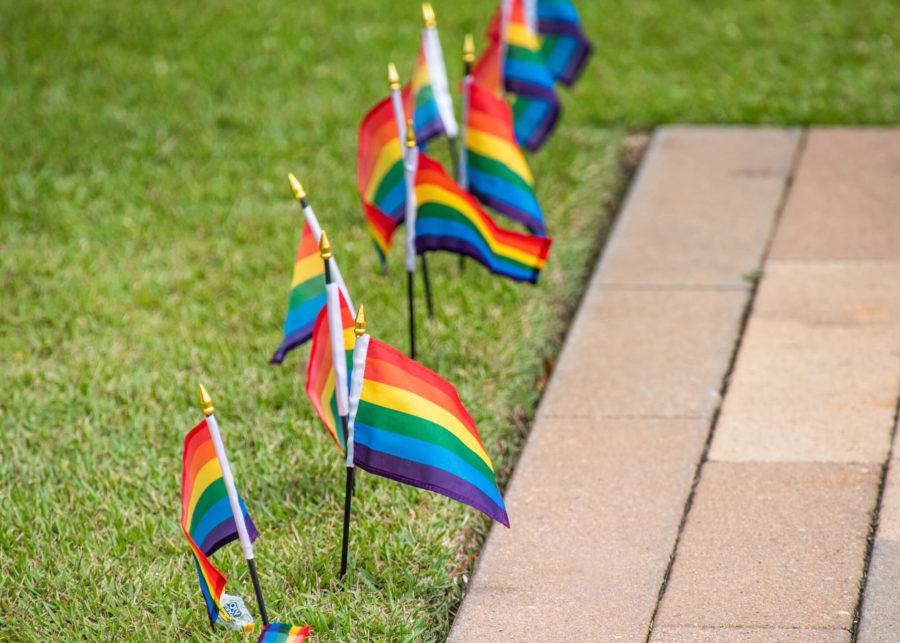 By Lauren Miceli
News Desk
Florida Gulf Coast University held its third Pride Parade on Wednesday, Oct. 9 during FGCU’s fourth annual Pride Week.
Different departments from FGCU participated in the parade and decorated golf carts in colorful flags, banners and signs. It started on the South Village lawn, went around the school and ended at the library where a block party for Pride Week was being held.
“I think the parade gives a voice to a lot of people who don’t feel that they have one,” said Mason Sims, a first-year faculty member at FGCU.
Students and faculty walked alongside makeshift floats, the golf carts, and handed out LGBTQ+ flags to anyone passing by who wanted one.
“It’s a good opportunity for us to help people feel more comfortable with themselves and to be able to identify openly if they feel comfortable doing so,” Sims said. “If they don’t feel comfortable, I hope we’re able to give them that image that it’s okay to be yourself.”
Sims volunteered to set up his department’s float, and he said he wants to continue supporting and being a part of FGCU Pride Week in the future.
According to Ysatiz Piñero, FGCU’s assistant director for the multicultural development initiative, FGCU Pride Week started off as a housing program.
She became involved with Pride Week three years ago, and that was when it became a campus-wide event including a parade. It used to have two or three events in total, but students can now expect a full week of events with two programs happening each day.
“I think everyone has, so far, accepted Pride Week,” Piñero said. “It’s to bring awareness and education about the community and for the community. It’s for those that identify in the community to celebrate.”
The block party doubled as a resource fair for students so they could learn about what FGCU offers specifically for the LGBTQ+ community. Free HIV testing was available that gave results in 15 minutes.
“I’m an ally of the committee, so it’s really important that all of our students that identify in the community feel welcomed,” Piñero said. “This week is kind of my chance to advocate for them on campus.”
She said she believes there is more work to be done to advance the progression of the community, but FGCU is stepping in the right direction, especially with the inclusion of gender-neutral bathrooms on campus.
“Pride at FGCU means we’re all open with each other and we can share with one another without fear of repercussion or negative stigma,” Sims said.