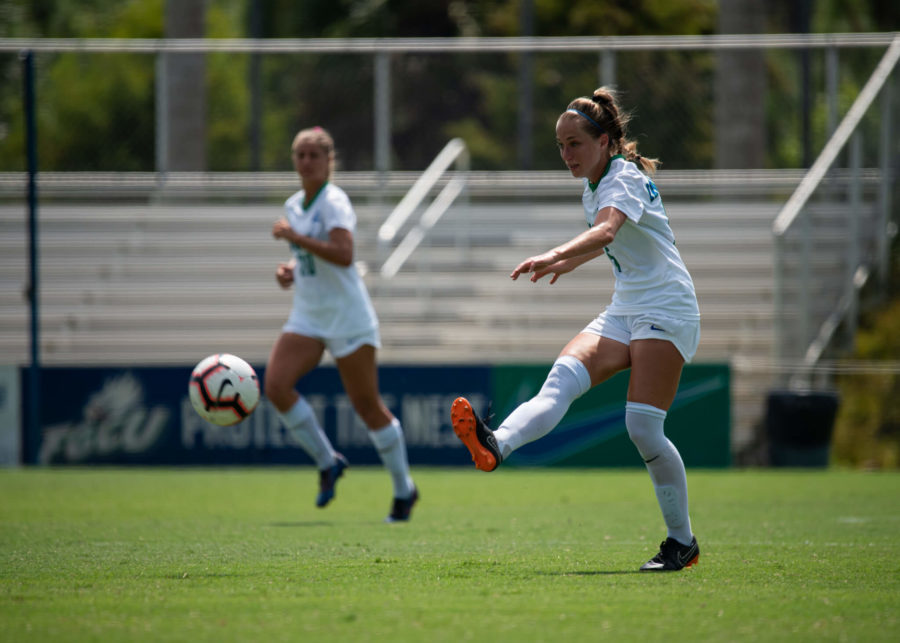 EN Photo by Julia Bonavita // With a 2-0 shutout against Kennesaw State, the FGCU women's soccer extends its winning streak to seven and remains tied for second in the ASUN standings.

By Bryce Thompson
Staff Writer
FGCU women’s soccer defeated Kennesaw State 2-0 on Thursday night, extending their win streak to seven games. The Eagles entered the night in a three-way tie for second place in a competitive Atlantic Sun Conference.
FGCU came out putting pressure on the Kennesaw State Owls with a shot within the first minute, which was saved by the Owl’s keeper. The first of many saves by both keepers throughout the matchup.
The Eagles continued to attack the Owls defensive third and eventually broke through in the 29th minute with a powerful strike by freshman Louise Lillback. Lillback’s goal was her sixth of the season and her second in the past two games. Her sixth goal puts her a goal behind senior Evdokia Popadinova for the team lead.
A back and forth defensive battle with multiple saves was the story of the first half, with the exception of the lone goal in the frame. The Eagles outshot the Owls 13-5 going into the break.
Kennesaw State opened the half looking to even the score and showed it with their fast-paced attacks and defensive pressure. The Owls created a chance to tie the game up in the 59th minute with a beautiful attack, but only to be outshined by an incredible save by FGCU’s senior keeper Melissa Weck.
Continuing their defensive dominance, the Eagles didn’t allow a shot until the 76th minute where once again, Weck made another impressive save and tallied her third in the game.
In the 86th minute, FGCU’s Silvana Gordon added to the 1-0 lead with an outstanding finish from a Lillback cross, ending any hope of a Kennesaw State comeback. Weck collected her fifth shutout on the season and is 4.7 shutouts away from the FGCU career record with five games left in the regular season.
The Eagles look to keep pace in the Atlantic Sun standings with a crucial matchup on senior night this Sunday against NJIT.