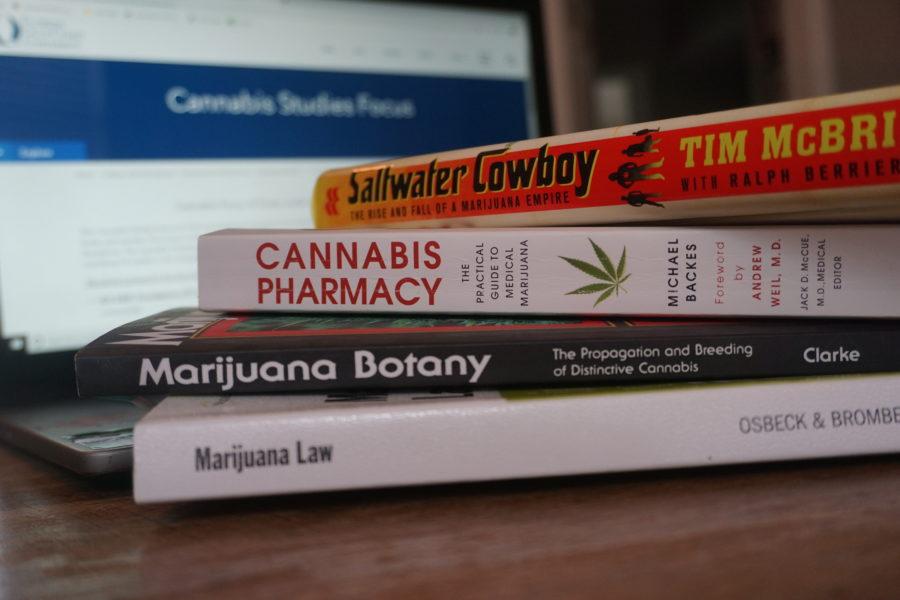 EN photo by Brooke Stiles. The textbooks used in the cannabis classes at FGCU.

In August of 2018, FGCU offered its first of many cannabis classes.
Since then, FGCU has created a Cannabis Studies focus under the Integrated Studies major, which currently offers six classes and will include three more in the next year.
According to FGCU’s website, “The Cannabis Studies focus at FGCU provides an integrated and multidisciplinary exploration of the impact that cannabis has on the mind, body, and society.” The program is said to be designed to allow students to enter this growing industry from a variety of angles.
“It’s not a narrow focus,” said Dr. Martha Rosenthal, who teaches multiple subjects at FGCU. “I have students in my class who want to go into business, who want to be doctors, who want to study the law and understand how [cannabis] all integrates.”
Rosenthal teaches neuroscience, which is what her Ph.D. is in, physiology, human sexuality, drugs and society, and now in the cannabis program.
“Drugs are interesting, and they have not only the pharmacological effects but the societal effects and the laws and the history,” Rosenthal said. “It’s just such a rich field of study. So, when Sam Walch put forth the idea of a cannabis class, I found out about it and said, ‘I’m in, I’m in!'”
Sam Walch, a professor at FGCU, coined the idea for cannabis education on campus.
“I was sitting on my lanai one morning, and I saw a story about medical marijuana passing by 72%, and I thought, ‘holy crap we should do a class on this then,'” Walch said. “The next morning, Dr. Rosenthal called me and then the weed class took off from there.”
The first class offered in this program was called Weed: Impact of Marijuana (now called Cannabis and its Impact) and was taught by Dr. Rosenthal and Professor Walch together. Currently, classes in the focus include a wide range of topics, such as pharmacology and physiology, chemistry, horticulture and botany, business and culture, and law.
“You can’t just teach physiology, which is fascinating, you’ve got to teach the law, which changes every day,”Rosenthal said. “You’ve got to teach history. You’ve got to teach the culture and religion. To really understand it, you’ve got to look at the plant and its chemistry. You’ve got to look at all of it.”
The news found out FGCU was offering a class about cannabis before it was even taught. From that, Rosenthal and Walch said local dispensaries and other companies had started going to them asking for interns and workers.
“Just from it being in the news, companies started coming to us, and we realized this was bigger than just one class,” said Rosenthal. “So, we put together the idea for CREW, the Cannabis Research, Education and Workforce Initiative. I did the education and research part, and Sam is working on the workforce.”
Along with the classes offered, there is also a weekly cannabis career club led by Walch and a five-day Cannabis Professional Certificate Program.
“We saw the interest when starting the Cannabis Focus and realized we need things not just for integrated students, but for all students, so we set up the club,” Walch said.
Michelle Hilmes, a student of the Cannabis Studies program and a member of the club, signed up for the program the day after hearing about it on the news. But she says it’s not enough to just take the classes.
“Just the classes are half of the puzzle,” Hilmes said. “You need the classes, and you need the experience of going to the cannabis career club, for instance, and mixing with those types of people. You are always going to learn something from somebody else, and I don’t want to miss that opportunity.”
Rosenthal says the certificate program is an intense, five-day program offering multi-disciplinaries and workshops from experts.
All of the opportunities that FGCU has to offer in cannabis are part of the plan to educate students and provide them with opportunities in the multidimensional world of cannabis.
“My goal is to establish the best program for producing leaders,” Walch said. “My job is to establish and keep good relationships with dispensaries and Florida companies and get students jobs.”
While Walch teaches the class Weed Culture, his passion lies in the industry itself:  watching it grow, and helping students be a part of that growth.
Dr. Rosenthal also wants to work with the industry, but her heart is in educating the students about cannabis to prepare them for the workforce.
“My love is education,” Rosenthal said. “I want an educated world. I want to work with dispensaries and make sure this workforce is educated.”
With the efforts of both professors and students’ growing interest, the cannabis focus has hopes of future growth.
“It’s been a really wonderful experience, and I can’t wait for the next semester,” Hilmes said. “I can’t wait to continue, and I’m not looking forward to ending it.”