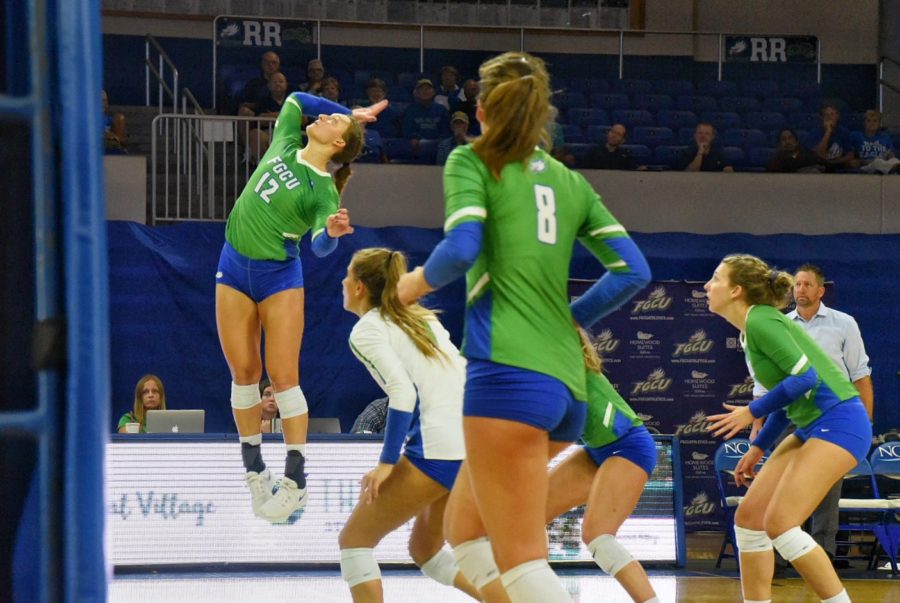 EN Photo by Julia Bonavita // Cortney VanLiew's streak of at least 10 kills per game fell at 15 with her seven kill performance against Jacksonville, but freshman Erin Shomaker starred with a team high 10 kills.

By Bryce Thompson
Staff Writer
FGCU defeated Jacksonville Friday night in an impressive three-set sweep (25-14, 25-22, 25-17). A complete team effort was the story, as multiple players contributed with solid performances throughout the match.
The Eagles jumped out to an early advantage in the first set and set the tone with a beautifully placed ace from Chelsey Lockey to extend their lead to 13-8. Lockey had her name all over the first set, finishing with 14 assists to claim a 25-14 win.
A competitive back-and-forth second set featured multiple small runs by both teams to keep it close.
Erin Shomaker and Daniele Serrano set the tone early with multiple kills by each and kept the Eagles in a close 15-14 battle.
With the Dolphins refusing to go away, the score remained close and with the help of Amanda Carroll’s 12th dig of the match, the Eagles fought off the Jacksonville efforts.
The second set eventually went to FGCU, as Shomaker and Snowy Burnam both had crucial kills in the closing few points, giving the Green and Blue a 25-22 win.
Coming off a grueling second set, there was no stopping the Eagles in the third set, grabbing a 16-9 lead. Once again Erin Shomaker hammered down another kill ending a JU 6-1 run, her 10th kill of the match.
FGCU wouldn’t look back and completed the sweep, winning the third set 25-17.
Erin Shomaker finished with a team-high 10 kills, followed by Daniele Serrano with 8, as well as Snowy Burnam and Cortney VanLiew with 7 each.
Unfortunately, VanLiew’s attempt at breaking the program record for consecutive matches with at least 10 kills, ends at 15 games. Even though her streak ends, the more important streak stays alive, the Eagles fifth straight victory.
Next for FGCU will be a meeting with first-place Kennesaw State at home Sunday, starting at 2 p.m.