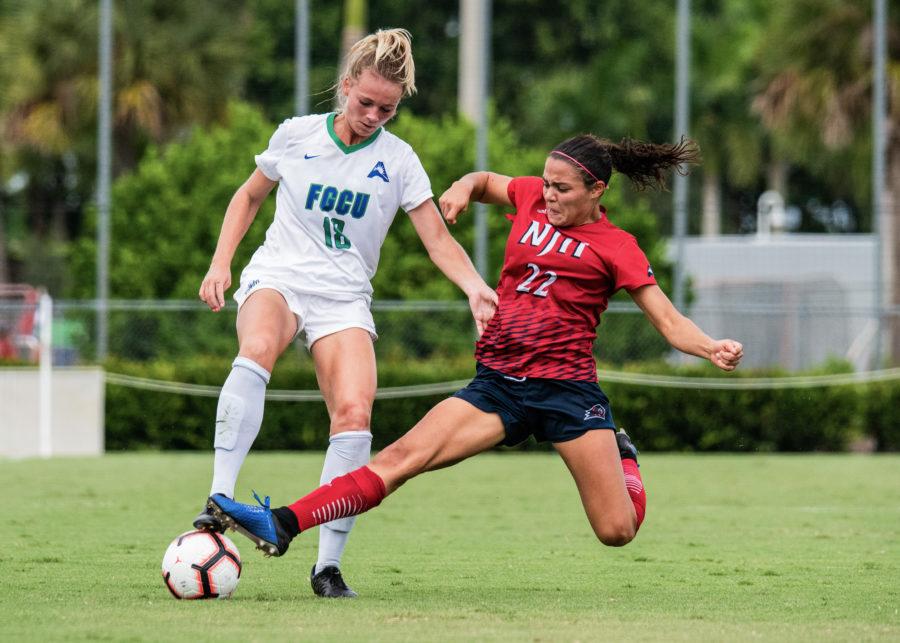 EN Photo by Julia Bonavita // Megan Young, junior, scored her first goal of the season as FGCU celebrated senior day with a 2-0 victory against NJIT.

By Cole Potts
Staff Writer
The FGCU women’s soccer team celebrated their senior ceremony with a shutout against NJIT 2-0 at home on Sunday. The team is now in first place in the ASUN Conference and the only undefeated team in conference play.
For the fourth match in a row, FGCU was able to put a score on the board in the first 45 minutes of the game with a goal from junior Megan Young, who was assisted by sophomore Kara Kyramarios.
Freshman Louise Lillback was able to extend FGCU’s lead with a goal, her seventh of the season, on a pair of passes from seniors Evdokia Popadinova and Marjorie Boilesen with 6 minutes left in the first half.
The Eagles were able to take the 2-0 lead into the halftime break while limiting NJIT to only one shot in the first half.
FGCU had a few more chances to score in the second half but went onto finish the matchup riding their first-half scores to victory against NJIT.
Senior goalkeeper Melissa Weck was able to secure her sixth solo shutout of the season, helping FGCU extend their win streak to 8 matches.
“This is a great result for us, we knew that today was going to be really challenging,” said head coach Jim Blankenship. “NJIT was one of a handful of undefeated teams in the conference, but I’m really happy with the pressure we put on them. We had two great goals and a really solid defensive performance. It was overall a great game for us and we put together a complete performance.”
FGCU women’s soccer now prepares to matchup against UNF on Thursday, Oct. 17 for their last ASUN home match of the year.